* Got a problem with your car? * Our team will help solve it * Contact us now... 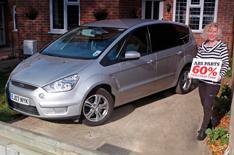 Kirri Cox was disappointed when her Ford S-Max developed a problem with the anti-lock brake (ABS) module. She was even more disappointed by the way Ford handled the issue.

A few weeks ago I noticed a noise that sounded like a fan continually going, Kirri told Helpdesk. I called the AA because it had flattened the battery. They said it was the ABS module. Perrys Ford in High Wycombe confirmed this.

The bill? Perrys quoted close to 1100. Kirri felt she shouldnt pay such a big bill on a car which, although four months out of warranty, had covered only 28,000 miles. She asked Ford to reduce the cost of repairs, but was told shed have to pay in full.

Kirri contacted Helpdesk. We pressed Ford to look more sympathetically on her case. After some negotiation, Ford offered 60% of the cost of parts, with Perrys discounting the labour. Kirri asked for the weekend to think it over.

When she got back to Perrys and Ford on Monday she claimed the offer had been withdrawn. I feel that Ford is being awkward and very unhelpful, said Kirri.

According to Ford, Kirri had rejected its offer, not asked for the weekend to consider it. After some arm-twisting the offer was back in place, though, leaving Kirri with a bill of 459.

If this happens to you
1 Consider recording important phone calls so you have a clear record of who said what - however, to avoid possible legal issues, you should inform the other party that you are recording the conversation.
2 Confirm important details by e-mail to reduce the chance of misunderstandings.
3 Stick to your guns if you feel you are being treated unfairly.