More for you |
Jaguar E-Pace vs Jaguar F-Pace: which is best?It it right for dealer to keep a used car's registration document for months? Will my car be able to run on the new E10 petrol? UK’s first electric car charging forecourt to openBMW X7 long-term test review
Home
News
Honda EV-ster
news

* Our favourite cars from Tokyo show * From superminis to sports cars * The cars UK buyers should keep an eye on... 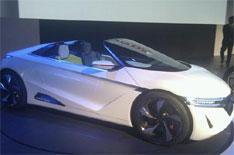 The pre-show sketches of Hondas two-seat, open-top sports car had us all talking about a spiritual successor to the S2000, or even a Boxster rival.

The real thing is neither of those; in fact, its a slightly oversized preview of a kei car, a tiny rear-wheel-drive model designed to beat Japanese tax regulations.

Does that mean its relevant to Europe and the UK? In basic terms, no. However, the EV-ster is significant for a few reasons.

Firstly, the project leader insists that it could yet stay at this size and that it will be sold first as an EV - so there is still an outside chance that it could make it to Europe. It would probably come in costing a fair chunk more than Hondas hybrid CR-Z sports coup, though.

Secondly, and more significantly, it shows that Honda is serious about making some fun cars again. Well see further proof of that in Detroit in a little over a months time, when the firm previews a new supersports car - a new NSX, in other words.

If it has a decent slice of the EV-sters sharp styling, it could look terrific. Strange to say this about a car thats unlikely to reach the UK, but the EV-ster really gives you hope.