This week our spotlight falls on what was arguably the first ‘everyday’ supercar, the Honda NSX. What made it so special and how has it aged?...

Back in the 1980s, running a supercar as a daily driver was reserved for the exceptionally brave or knuckle-draggingly stupid. While cars with a prancing horse or raging bull on the nose looked other-worldly and were undoubtedly rapid, they were also impractical, unreliable or absolute pigs to drive most of the time.

That had been the case ever since the term 'supercar' first entered general use, following the launch of the Lamborghini Miura in 1966, but things were about to change. In 1989, the wraps came off a very different kind of supercar, the Honda NSX. Naturally it was fast, but it also promised reliability, usability and even a jot of practicality.

Its high-revving V6 engine and advanced aluminium construction may have piqued our interest, but it was the NSX’s user-friendly side that helped make it a What Car? Award winner. So, without further ado, let's take a look at how it came about, and slip behind the wheel to see if it still impresses today.

Unbelievably, the NSX can trace its roots back to an experimental car based on the Honda City hatchback (below). Rather than having the engine under the bonnet powering the front wheels, the dinky motor was moved to the middle of the car and drove the rear wheels. The idea was that it would allow more efficient packaging and a sportier drive.

Although no real advantage could be found over the regular City, Honda's engineers loved driving it so much that they decided to concentrate their research on the dynamic advantages of a mid-engined layout. In other words, how well it could go round corners.

With Honda involved in Formula 1 at the time, a mid-engined sports car was seen as the perfect link between the firm’s road cars and the racing cars they powered. In 1985, development began in earnest of what was to become the NSX.

But Honda wasn’t interested in creating a racing car for the road. Instead, they looked to create something that would be comfortable for normal-sized people and use the very latest technology. Even so, a certain Ayrton Senna would have a big impact on the development of the NSX. 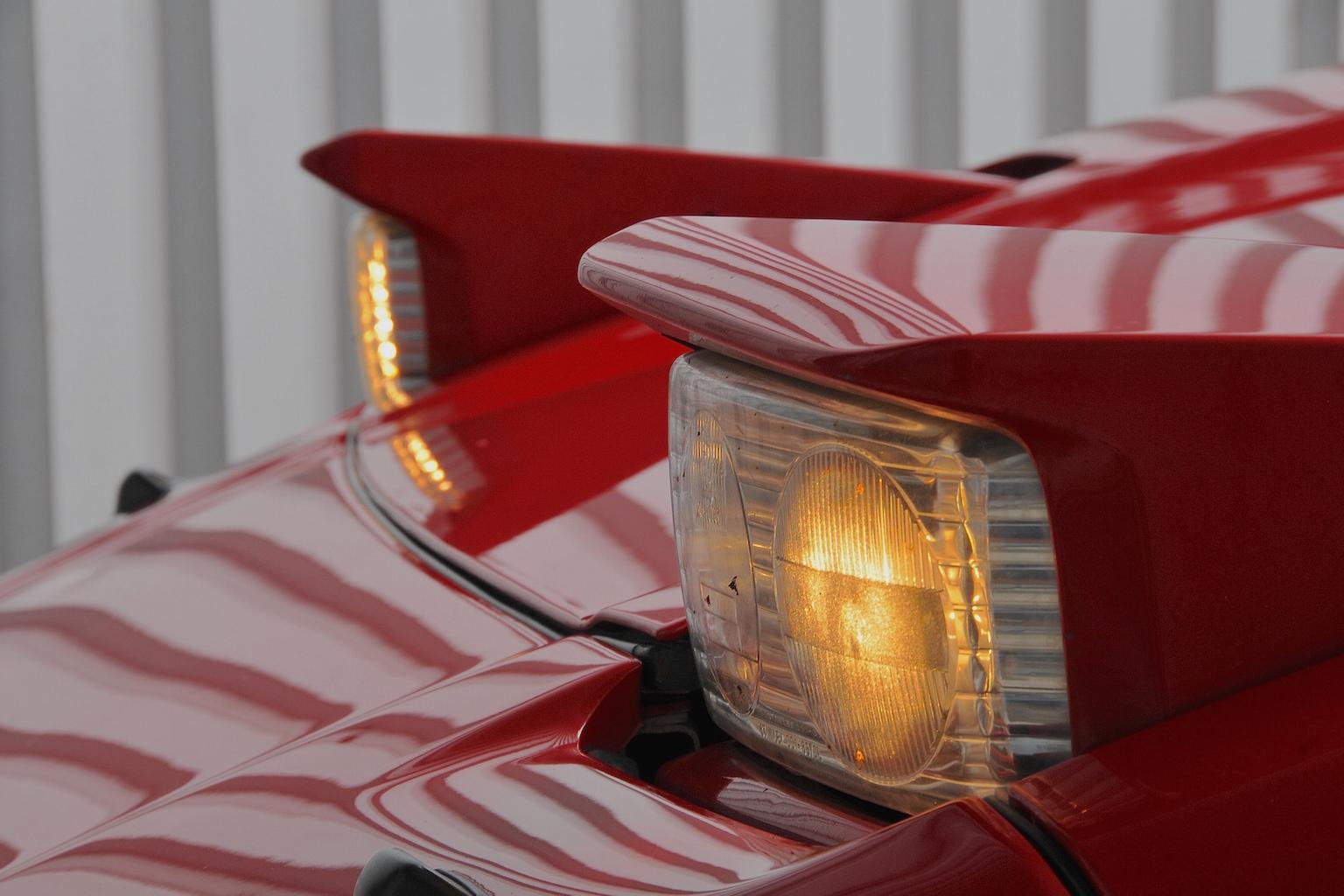 By the time it was revealed in February 1989, Honda had created a car with a lightweight all-aluminium body, an engine that produced huge amounts of power given its modest 3.0-litre capacity and advanced electronics including anti-lock brakes, traction control and climate control. Essentially, it made the competition look old-hat and forced them to seriously up their game.

Our 1992 Best High Performance Car of the Year

To say the Honda NSX blew us away is something of an understatement. Despite costing £56,000, it beat the likes of the Audi Coupé S2, Mercedes-Benz 500 SL and the evergreen Porsche 911 Carerra. Considering this was Honda’s first attempt at a supercar, that’s quite a feat. But, of course, there was a reason for this success, as we explained at the time:

‘Honda wasn’t content merely to match the European supercars. It wanted to beat them at their own game, and gave the R&D team an almost limitless budget to do it.'

Although it had ‘the sensuous looks and spine-tingling sound of a Ferrari, the blistering performance of a Porsche and the handling prowess of a Lotus’, we were just as impressed with its usability. 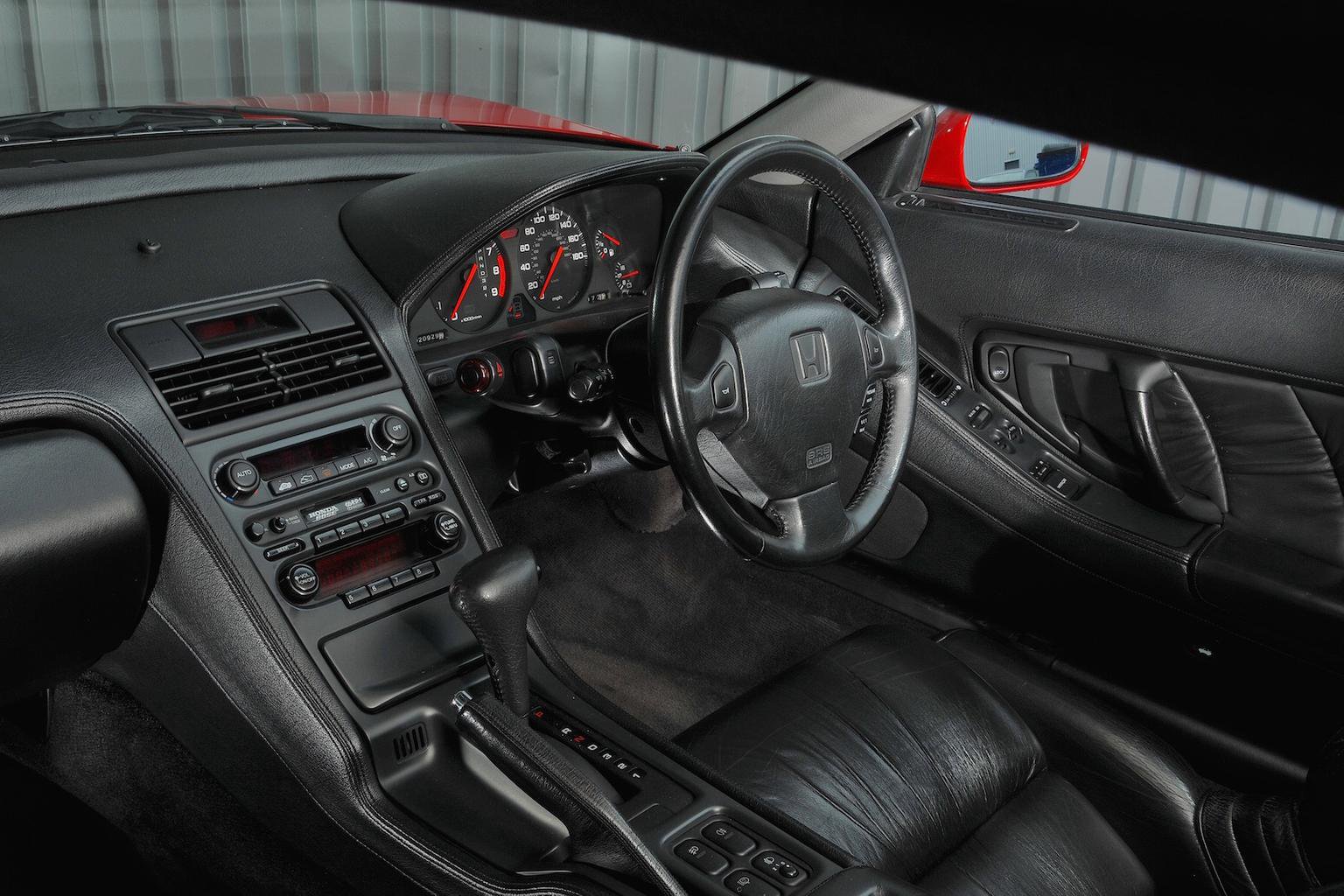 'This car is as easy to drive as a Ford Escort,' we continued, 'with a smooth-acting, quirk-free set of controls that the merest novice could understand, and an interior that you can see out of in all directions. Here’s a supercar as much at home in town traffic as on the open road; it gives all the pleasure with none of the snags usually tolerated in a supercar in the guise of "character"’.

Walking up to Honda’s pre-production example from 1989, I find my smile getting wider with every step. The shape may be nearly thirty years old, but it’s as striking as ever and one imprinted on my mind from countless late nights playing Gran Turismo.

Swing open the lightweight door and you might be surprised by what you find. Sure, there's lots of black leather, a Bose stereo (complete with tape deck) and a few other luxuries, but the interior screams 1990s Honda. In other words, it’s solidly built and ergonomically sound, but there’s little of the drama you found outside. 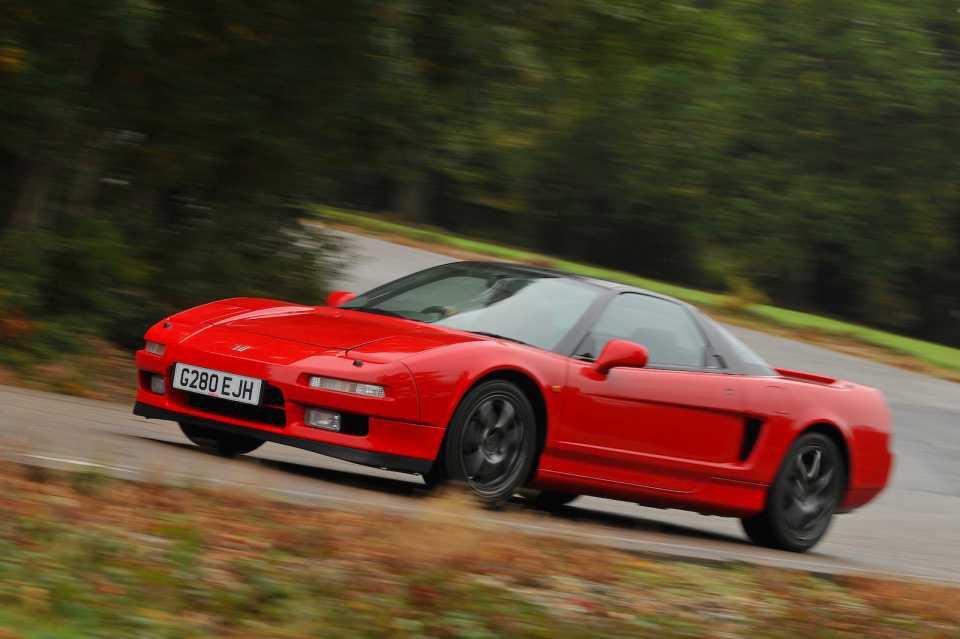 Not that you have to look far for some excitement. The windscreen gives an astonishingly good view of the wedgy nose and you can see the rear spoiler in your rear view mirror. In fact, there isn’t much you can’t see; the NSX might be lower than a snake’s belly button but visibility is better than most modern hatchbacks.

This sensible side continues with an engine that is whisper quiet and luxuriously smooth coupled to an automatic gearbox. Unlike modern performance-enhancing units, this is an antiquated four-speed unit that does a remarkably good job of smothering a truly wonderful engine. It’s a real shame, as the snickety manual gearbox that came as standard was a perfect match to the revvy V6.

Even so, there is some user control if you don’t mind grappling with what feels like something from the industrial revolution. Wrestle the gearlever into second, plant your foot on the accelerator and be prepared to shift up at a dizzying 7500rpm (sadly 1000rpm less than the manual version). Do this and you feel the VTEC-enhanced engine go from mild-mannered and refined to a howling madman as it closes in on the redline. Sure, many a modern hot hatch would be far faster, but not many sound so incredible or have you chasing the rev limiter for the sheer hell of it.

There’s a similar Jekyll & Hyde feel to the ride and handling. Tiny 16in front and 17in rear wheels and tyres with fat sidewalls make it remarkably comfortable over even the most tortuous B road, yet it feels like there’s virtually no body roll in the corners. 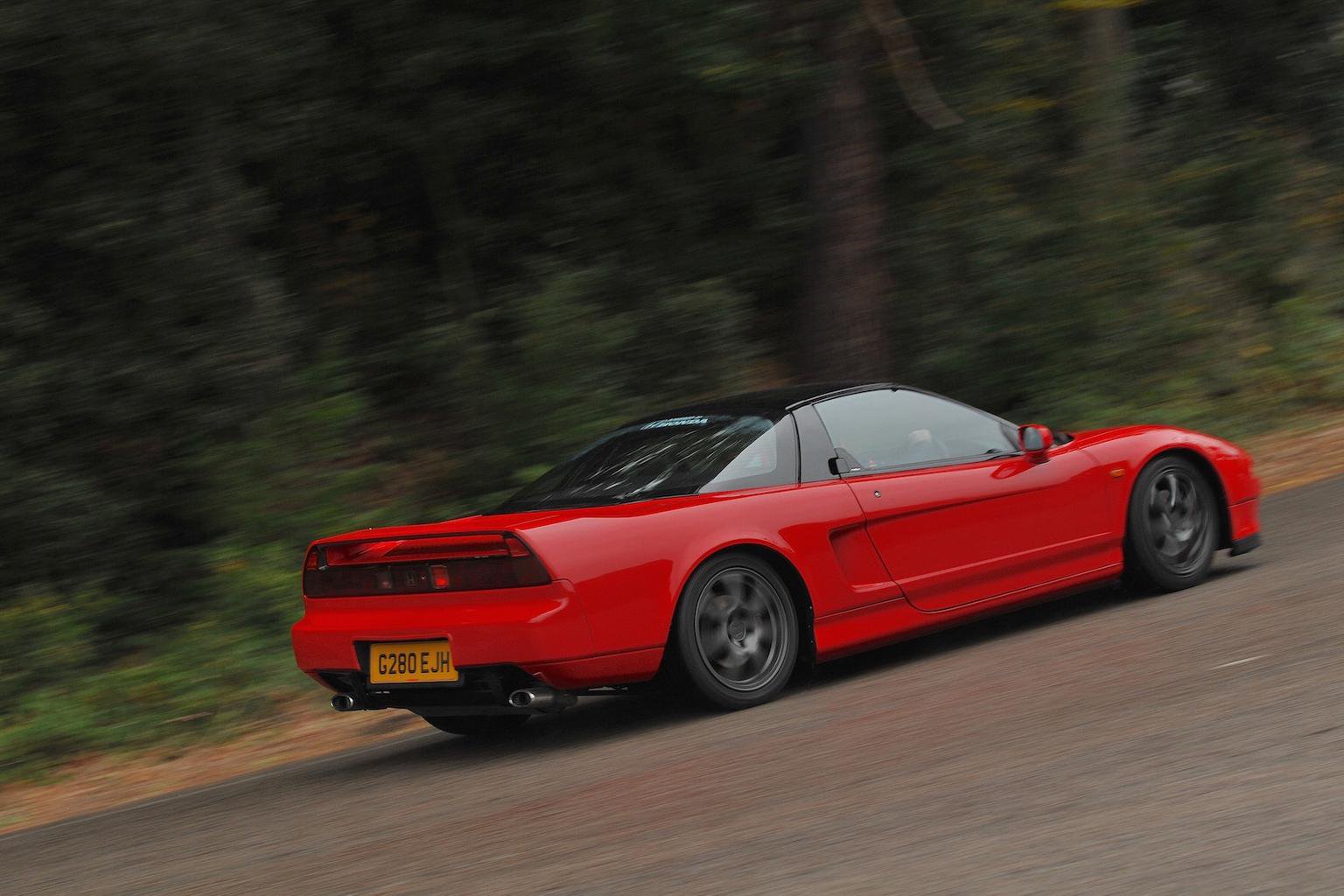 Then there’s the steering, which is fingertip-light at parking speeds but seems to have no assistance at all once you’ve got some lock on at speed. That's daunting at first, but once you're used to it there’s something satisfying about having to muscle the nose into corners.

Unlike some older cars you jump into, the brakes feel strong and confidence inspiring and there’s lots of grip. Even so, you have to remind yourself that you’re still in a mid-engined car with very little in the way of electronic assistance. The NSX may feel like a pussycat most of the time, but it hides some sharp claws.

Next: What should you pay for a used NSX? > 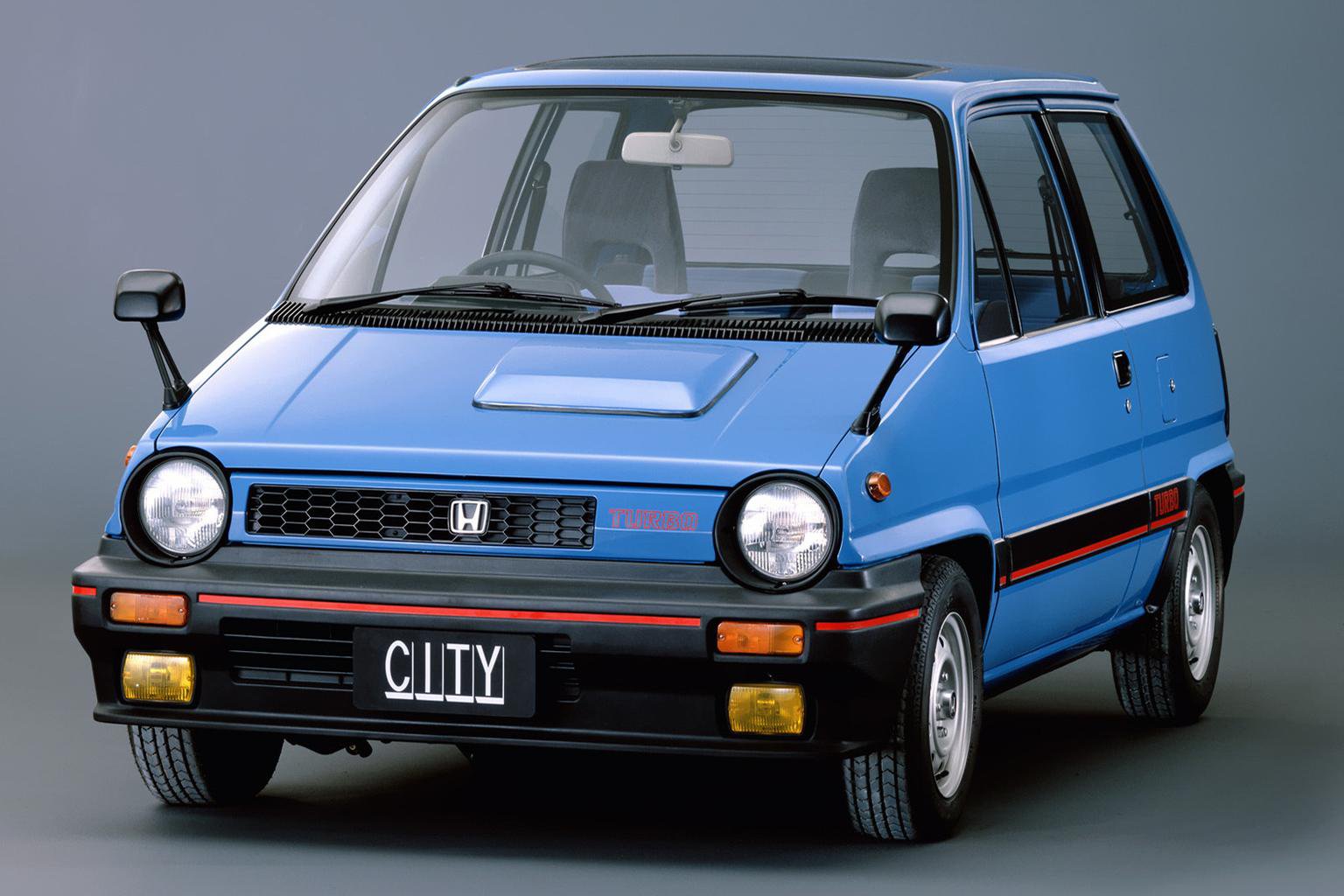