More for you |
True MPG: most and least efficient cars revealedConfessions of an AA technicianUsed BMW i3 vs VW e-GolfHow to spec a Jaguar XENew issue of What Car? magazine on sale now
Home
News
Honda restarts production at Swindon
news 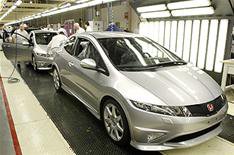 Thousands of workers at Honda's Swindon factory returned to work today after a four-month shutdown.

Production at the plant which builds the Civic and CR-V models for Europe was suspended at the end of January due to a sharp drop in demand caused by the economic downturn.

During the lay-off, Honda introduced an 'Associate Release Programme', through which 1300 workers took voluntary redundancy. The remaining 3400 employees have agreed to a temporary pay cut until March 2010. Most will take a 3% drop in wages, but managers will forfeit 5%.

Production of the new Jazz starts at Swindon in the autumn, which Honda says will help to secure the long-term future of the plant.