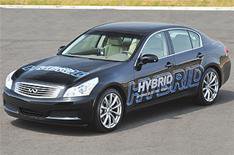 Nissan was demonstrating its first home-built hybrid system on a rear-wheel drive 3.5-litre petrol-engine Infiniti G35, and is putting great emphasis on the fact that the fuel-saving technology must not interfere with driving pleasure.

The hybrid system accelerates the car at low speeds on electric power, before the engine comes in under heavy acceleration and higher speeds.

However, once the car is only accelerating gently or reaches cruising speed, it will either boost acceleration with electric power or switch to electric power entirely as long as there is sufficient charge in the lithium-ion batteries.

As is common with such systems, the engine recharges the battery when it is running, as does energy captured from braking.

Unlike the hybrid system in Toyota's Prius, for instance, which uses nickel metal hydride batteries, Nissan has employed lithium-ion battery technology. Lithium-ion batteries can provide more power and are smaller, although problems with battery life and cooling have previously restricted their use.

The fact Nissan felt confident enough to demonstrate the system shows how close it believes it is to being ready, although the switch between electric and engine power felt unusually jerky, suggesting there is still work to do.

Nissan won't be drawn on the potential fuel savings offered by the system, but say that the goal is to return family car mpg figures from a large executive car.

The system will go on sale in 2010, and is expected to initially be fitted to a large-engined luxury car.