More for you |
2021 DS 9 luxury car revealed: price, specs and release dateWhat is GAP insurance and how much should you pay for it?Why does the new Hyundai i10 get five stars?New MG ZS EV vs new Renault Zoe2020 Jaguar XE long-term test review
Home
News
Hyundai ix-Metro
news 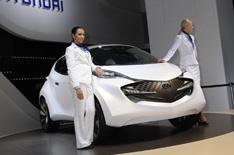 What is it?
A hybrid supermini-sized concept car from Hyundai.

Whats with the wild looks?
The inspiration for the styling, Hyundai says, comes straight out of a sci-fi movie and takes design in a new direction from recent Hyundai concept cars, with its sharp, angular lines and wraparound windscreen.

The rear doors may look like they will open conventionally, but in fact they slide.

Step inside and it looks as though you're on the set of 2001: A Space Odyssey. A white silicon-like material covers the dashboard. Panels in the seats, cargo space and other areas are divided by bright blue lights.

The ix-Metro is powered by a 1.0-litre turbocharged petrol engine, while extra torque comes from a starter motor alternator. Total power output is 125bhp. It is fitted to a six-speed semi-automatic gearbox.

How green is it?
Hyundai says carbon dioxide emissions are pegged at 80g/km.