More for you |
2021 DS 9 luxury car revealed: price, specs and release dateWhat is GAP insurance and how much should you pay for it?Why does the new Hyundai i10 get five stars?New MG ZS EV vs new Renault Zoe2020 Jaguar XE long-term test review
Home
News
Hyundai's rapid development continues
news

* New i30 on sale next spring * Just five years since original i30 was launched * Eight launches planned by end of next year... 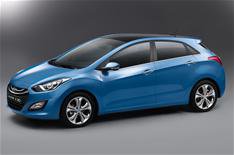 Hyundai will continue the rapid model turnaround that has brought the latest i30 to market just five years after the outgoing generation, according to the company's European vice president.

The new Golf rival, officially unveiled at the Frankfurt show today ahead of sales starting next spring, replaces a car that was introduced in mid-2007 and is still considered a reasonable proposition against its rivals. That product cycle is considerably faster than those adopted by Hyundai's rivals, many of whom expect a generation of car to last up to seven years.

Hyundai Europe vice-president Allan Rushforth said he could 'see no reason' why the firm would slow its rate of change.

'I don't see why we would stop that,' he said. 'Actually, because Hyundai's market share in Korea is so big, the appetite for huge change at every model is considerable; we have to throttle it back a little for European tastes. With that in mind, I'd be confident that the current rate will continue.'

The i30 gets a longer wheelbase that's pushed closer to either end of the car - a move designed to improve interior space (it has class-leading levels of rear kneeroom, Hyundai claims) and improve ride quality. Hyundai is hoping that its blend of more premium features, low CO2 and improved fuel economy will help a fresh push to attract more fleet buyers; around 55% of UK car sales are corporate, but those buyers make up well under 40% of Hyundai GB's sales total.

Hyundai has another eight launches planned between now and the end of 2012; they're expected to include a new Santa Fe and the i40 saloon, and that number doesn't include the Veloster 'practical coupe', which has yet to make its debut in the UK.

The line-up does not include a European version of the large Genesis saloon, however. 'We've taken the decision to not bring the current generation of that car to Europe,' said Rushforth. 'We'll make a fresh call on that when the next version of the car arrives, in about three years' time.'