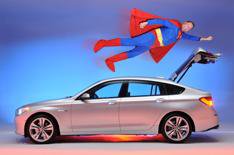 Living with it
The other thing that started to annoy me early on was the ride quality. Once I got onto a smooth motorway things were fine, but it was a different story in town.

At low speed the ride was jiggly, which probably wasnt helped by either the run-flat tyres or the larger alloys I picked, but it was too harsh for a grand tourer.
Road bumps thumped their way into the cabin, too.

Day-to-day life with the 5 GT wasnt that bad, though. Not including my boot issues and the low-speed ride, using the car for work duties was a good experience and I got the best from the BMW on long-distance motorway trips.

One of the best things about the car was its 241bhp 3.0-litre diesel engine: it was strong and silky smooth which was just what I needed when I was really racking up the miles. The eight-speed automatic gearbox was equally slick when changing gear.

Buying information
Running costs
Servicing and repair costs
Depreciation index
List- and Target PriceOne of my favourite gadgets was the head-up display (920). Even with the sat-nav screen in the middle of the dash, having the instructions pop up on the windscreen in front of me was more convenient: it meant I didnt have to take my eyes off the road when driving through unfamiliar surroundings.

Most useful, though, were the cameras. The 5 GTs long nose presented a few problems when trying to edge out into traffic, but the side-view cameras at the front meant I only had to poke the nose out to check for other cars.

Bangs, scrapes and conkers
The cars rear visibility wasnt great, either, so Im glad I got the rear parking camera. It worked a treat apart from on one occasion: I was reversing into a space in a multi-storey car park and everything was fine the camera said so, as did the parking sensors. What I hadnt taken into account was the wall behind me, which jutted out above the camera and sensors. I nudged the wall and left a dent in the boot lid.

That wasnt the only incident. In the early autumn a couple of conkers fell onto the bonnet and roof, which left more dents in the bodywork. The low-profile tyres meant that any close encounters with kerbs led to dinged alloys, too. Repairing the dents and refurbishing the wheels cost 517.

There were a few other things I had to fork out for, too. Two of the run-flat tyres had to be replaced at around 19,000 miles (a pricey 660), while a third was done at Cooper Thames Ditton during the first service (which accounted for 379 of the 734 bill).

The 5 GT's lofty driving position and large windows afforded a good view out, but the ride was too firmRunning costs
The official fuel economy figure for this car is 43.5mpg, but I got a very disappointing 32.6. Maybe it had something to do with the larger wheels, or the extra weight of my photography gear, but I was hoping it would be better.

The value of the car also plummeted during the year. Although it had higher-than-average mileage, I was still astonished that the part-exchange value was around 20,000 less than my 5 GT was worth new.

So was the 5 GT a superhero or villain? Some areas of the car were fabulous, such as the tech and the comfy cabin, but it just wasnt up to dealing with my work demands. Id have a BMW again, but I dont think it would be this one.

I have done 10,000 miles now and I am still very pleased with the cars comfort and drive. Ive been impressed by how easily it has coped with the recent snow, too. The only negative is a rear puncture BMW quoted 420 for a new 20in run-flat tyre, while ATS replaced it for 300.
Average whatcar.com reader rating