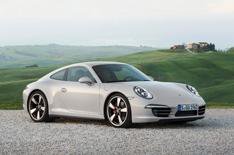 This is the Porsche 911 50 Years Edition, which has been revealed to celebrate the model's 50th anniversary in 2013.

The most noticeable change over the standard Carrera S is the wider body, which is usually found on four-wheel-drive versions of the 911.

Other exterior additions include '911 50' badging on the tailgate, unique 20-inch alloy wheels and chrome strips over the engine compartment in place of the standard slats.

The Porsche Active Suspension Management system has been tuned to suit the wider track and the 50 Years Edition also gets the sports exhaust system as standard. Porsche's Dynamic Light System, which adds an adaptive cornering function to the bi-xenon headlights is also included.

Inside, the cabin has detailing that pays tribute to the original 911, including white needles on the dials, green labelling on the instruments, and fabric inserts on the leather seats that mimic the tartan design from the 1960s car.

The Porsche 911 50 Years Edition is available in special light or dark grey paint finishes as well as black. It will be limited to 1963 units and is priced from 92,257. It is available to order now and the UK owners can expect deliveries from September.