More for you |
Used Ford Fiesta long-term test reviewWhat can I do about a security issue on my car? Best cars for less than £250 per monthWhy is my new car’s fuel economy so poor?Top 10 used electric cars
Home
News
Lorry drivers in fuel protest
news 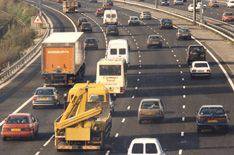 Lorry drivers are set to take part in a day of protest about the spiralling costs of fuel.

The action will close the A40, on of the main routes into central London, as hauliers travel in convoy to hand in a petition to 10 Downing Street.

The M25 around London and the M4 in south Wales will also be affected in separate protests.

With the average price of diesel now 126.7p per litre and a further 2p per litre tax rise due in the autumn, hauliers claim the rising price of fuel will put many out of business.

'Fuel is rocketing,' said Mile Presneil of Transaction 2007. 'Hundreds of UK transport firms are being driven to the wall. The Government has to power to act but appears not to be listening.'