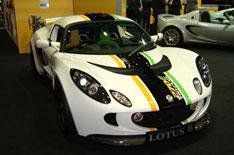 Lotus's engineering consultancy division is showing a triple-fuel car that suggests methanol might be the best carbon-neutral fuel of the future within a couple of decades.

The Exige 270E can run on petrol, plant-sourced bio-ethanol or hydrogen-based methanol but it is the methanol part that Lotus believes could be most beneficial.

Unlike bio-ethanol, it does not compete with trees or food crops for land space (though next-generation bio-ethanols will avoid this, too). Instead, it is made from hydrogen and carbon dioxide (CO2).

Hydrogen is normally energy-intensive to make, transport and store, but when mixed with CO2 it turns into a liquid that can be moved about and distributed just like petrol.

And it could be used in a petrol engine 100% neat with only minor managements system changes, Lotus says.

Performance and fuel economy suffer compared with a petrol engine because methanol is less energy dense, while CO2 emissions are about the same. However, as CO2 is partially used in thr manufacture of methanol, the car effectively becomes carbon-neutral.

The 270 E is powered b y the same 1.8-litre supercharged engine used in the production model, but with power upped to a record 270bhp.

The tri-fuel stuffy is described as an extension of Lotus's long-term research int sustainable, synthetic fuels.