Lotus spruces up Exige and Elise 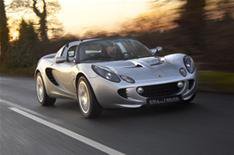 Lotus has put together a package of improvements designed to spruce its Exige and Elise models.

The British car maker says the changes both inside and out will make the two model ranges more sophisticated and better value.

Elise SC
Lotus also launched its new supercharged Elise SC, which is on sale now in the UK with prices starting at 32,550.

This model uses the 1.8-litre engine in the Elise, but the supercharger and the absence of an intercooler pushes the power up to 218bhp.

The SC also gets a new rear spoiler, bespoke alloy wheels and an oversized exhaust.

Now both models get driver and passenger airbags as standard and there's a new instrument panel, which includes black, rather than white, dials.

Extra instrumentation such as service reminders and a new gearshift light telling the driver when the car is at its rev limit are also included.

Warning lights are not visible until they light up as Lotus has sought to de-clutter the instrument panel.

Customers can also choose from a new range of colours: the less popular paint ranges have been ditched to make way for more vibrant pearlescent colours.

The Exige and Elise both have a new Thatcham-approved alarm/immobiliser system, and that means owners will get an updated key fob, where the Lotus badge acts as one of the three function buttons.

The company has also streamlined its option packs from four to two. The Super Touring and Super Sport packages have been dropped, so customers only have to choose from the Touring Pack and Sport Pack.

The Sports Pack for the Elise has traction control, sports dampers, sports seats and lightweight wheels, while the Exige has an adjustable anti-roll bar, a roll bar and integrated harness mounts.