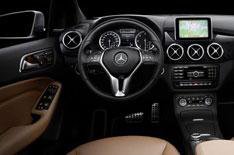 Mercedes-Benz has released interior photos of its all-new B-Class that will go on sale in the UK next year.

The photos show a new design direction for Mercedes, with more organic forms and sporty details than the current car.

Five round air vents, similar to those in the SLK Roadster, dominate the dashboard, along with a central display screen that has been designed to resemble an iPhone.

Buyers will get the option of stitched leather-effect trim on top of the dashboard, and the choice of wood, Piano Black and metal-effect designs for the centre panel of the dash.

Automatic versions of the B-Class will now get a steering column-mounted gearshift.

Photos of the exterior and performance details of the B-Class will be released next month, and the car will be unveiled in the metal at the Frankfurt motor show in September.

The B-Class will go on sale in spring 2012. Its the first in a range of new compact Mercedes models - that share the same platform and technology, and which will go on sale over the next few years.