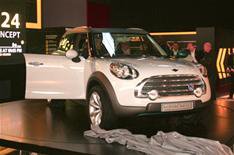 The Crossman 4x4 set to go on sale in 2010 will mark a new direction for the company.

The Crossman was shown as a concept car at last year's Paris motor show.

It is taller, wider and longer than the Clubman, and Mini designer Marcus Syring believes it could be the first of many derivates that take the Mini brand into new areas.

'The Crossman 4x4 is not a direct derivative of the Cooper, like the Convertible or Clubman,' said Syring. 'It is a second range for Mini, and while it will clearly be part of the family, it will be strongly differentiated from anything else.'

Syring quashed suggestions that any new derivatives would push Mini in a new design direction, however.

'Look at the Porsche 911,' he said. 'That embodies Porsche's products, and it is clear that every car in the Porsche range is from the same family, even if it is differentiated.'

A new Moke?
Syring would not be drawn on what types of cars Mini might build in the future, but suggested that a reinvention of the Mini Moke would appeal to him.

'As a designer, it would be fun,' he said, 'but whether there is a business case for it is another matter.

'Whatever we do has to look back to what Issigonis first had. We must never lose sight of that.

'Other brands can change the face and even the name of a car. For us, though, people must always look at the car and know in their heart that it is a Mini.'