* BMW boss imagines 10 Mini models * BMWs could be made at Mini factory * Future Minis will have Rocketman concept features... 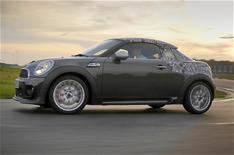 The Mini brand could eventually spawn as many as 10 models, BMW's boss Norbert Reithoffer has revealed to What Car?

Speaking in London after the announcement of a 500 million investment to produce the third generation Mini at its Oxford factory from 2013, Reithoffer said that he 'can imagine 10 Minis'.

The all-new model will be built on a new platform, dubbed UKL, which will also form the basis of a new family of front-wheel-drive BMW hatches. Some of these could also be made in Britain, on the same line as the new Mini.

However before the all-new model arrives, BMW bosses are still planning new Mini variants. The Mini Coupe is due to arrive later this year, with a Roadster version arriving in 2012. The company has also promised to build a Coupe version of the Countryman crossover, as previewed by the Paceman concept at the Detroit show in January.

One concept still undecided on is the cute Rocketman concept, revealed at the Geneva show in March, and far closer to the proportions of the Issigonis-designed original Mini of 1959.

'The Rocketman was a concept and we have no plans to take it further, but features of it will appear on future Minis, BMW Sales boss Ian Robertson admitted to What Car?.

Senior company insiders have admitted that the Rocketman's innovative door designs and use of lightweight carbonfibre technologies will appear on future Minis.