More average-speed cameras on the way 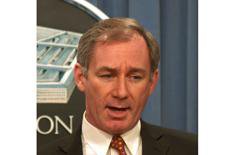 Average-speed cameras measure speed over distance and, at present, are usually found in roadworks on motorways.

Motoring organisation the AA warned that widespread use of average-speed cameras could lead to traffic bunching-up on busy roads as cars slowed all at once, but added that they are more effective than fixed place cameras.