More for you |
Promoted | 5 reasons why it makes sense to go electric todayBig savings on our Car of the Year Awards winnersWhat Car? Awards 2021: The best cars you can buy2021 Nissan Qashqai: electric and hybrid power revealedCar of the Year 2021
Home
News
More drivers ignoring mobile phone laws
news

* Number increases since tougher penalties * Are you in the highest-offending age group? * Drivers four times more likely to crash... 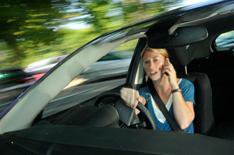 More drivers are illegally using hand-held mobile phones, in spite of tough new laws to make them hang up.

Despite being four times more likely to crash, research by the Transport Research Laboratory (TRL) found that the number of offending drivers has increased since fines were increased to 60 and three penalty points could be applied.

Offending is on the increase
The research revealed that 2.6% of motorists were flouting the law in 2006 compared with 2.8% in 2009.

The study also showed that the number of drivers illegally using their phones halved immediately after the introduction of tougher penalties in 2006, but the figure has been rising ever since.

The main offenders
Statistics from the study have exposed women aged 17-29 and men between 30-59 as the worst offenders for using hand-held phones while behind the wheel.

Doctor Nick Reed from TRL explained the dangers of using such phones while driving: 'Your reaction time is likely to be slower, you're more likely to drift across into the adjacent lanes and you're less aware of what's going on around you.

'You're also less likely to check the mirrors and know there are vehicles there, so you're at a much greater risk of having an accident.'

No extra powers to 'community cops'
Former transport minister Stephen Ladyman, who introduced the tougher penalties, said more changes may be needed: 'The government is probably going to have to move to a situation where it's not just the police who can issue you a fine.

'Perhaps they're going to have to give powers to Police Community Support Officers (PCSOs) or even traffic wardens if they spot you using your hand-held phone.'

However, the Home Office said it currently had no plans to change legislation to give increased powers to PCSOs or traffic wardens.

Hands-free use on the rise
The report also revealed that the use of hands-free phones had increased, too from 1.2% of drivers in 2006 to 4.8% now.