New BMW i4 vs Tesla Model 3

Hammer and tongs, tooth and nail; the rivalry between these musclebound electric cars will be seriously hard fought...

BMW’s legendary M division has been responsible for producing some of the finest driver’s cars of all time, so we have high hopes for its first pure electric model

The Tesla Model 3 Performance blends supercar speed with an impressive range and a spacious interior. It will be incredibly tough to beat

Remember when Elon Musk tweeted in support of Kanye West’s presidential run, or when he suddenly announced that Tesla would accept a form of cryptocurrency named after an internet meme? The Tesla CEO’s Twitter page is full of wild claims and questionable statements, but perhaps the most memorable for us car lovers is when he claimed that the then yet-to-be-released Tesla Model 3 Performance would be quicker around a racetrack than the legendary BMW M3.

As statements go, it was bold. Sure, an electric vehicle (EV) may be quicker in a straight line than a petrol-powered performance saloon – indeed, the larger Model S had already proved that. But an EV that could outperform an M3 around a track? It just didn’t seem possible, until all of sudden, it was.

Within months of the Model 3 being released, various people around the world proved that, in the right conditions, it could indeed go quicker than the BMW around a racetrack. This not only generated great publicity for the Californian company but also gave more credence to those who see Musk as something of a marketing genius. 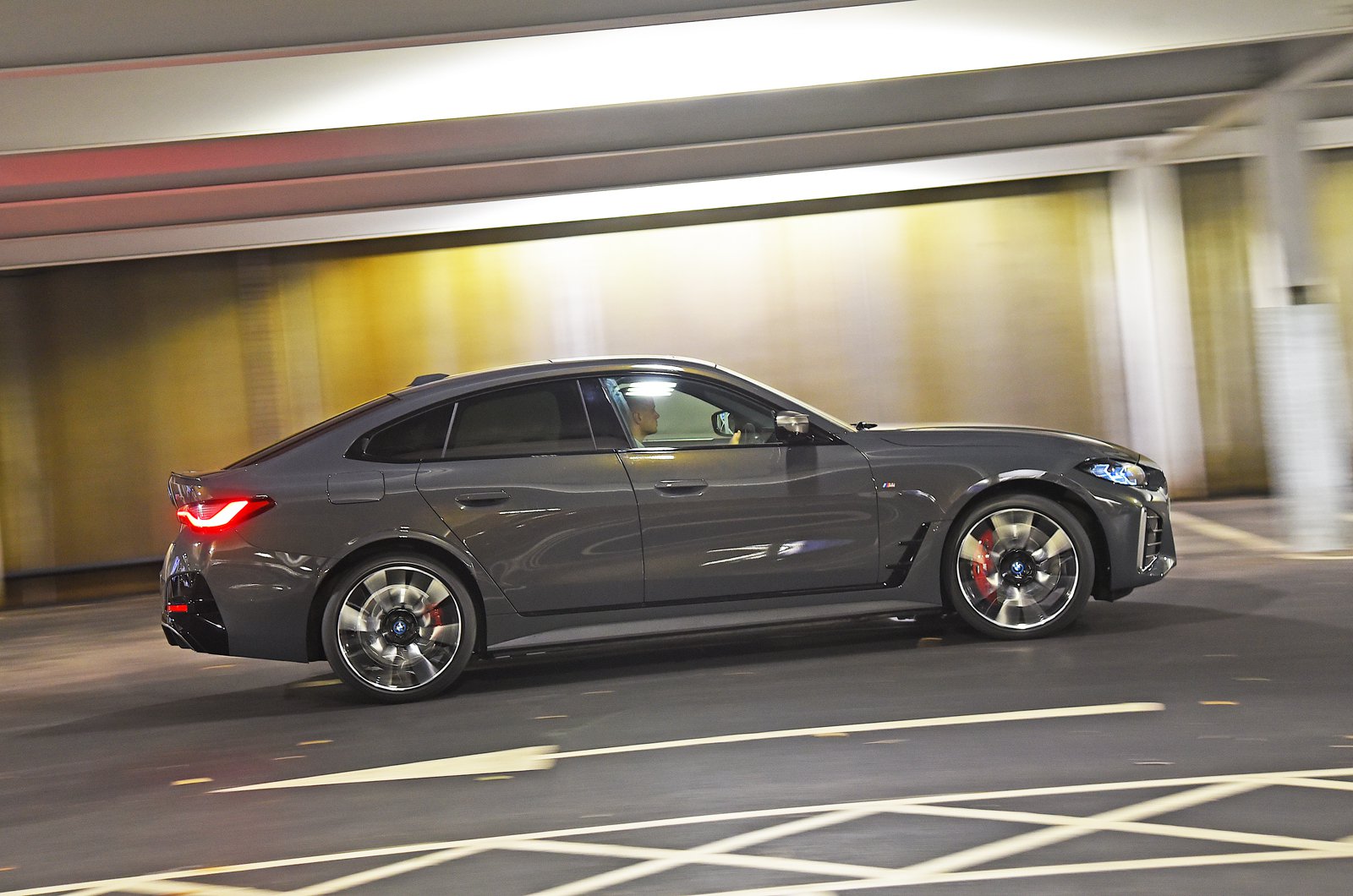 Now, though, it’s finally time for BMW to get its own back. Designed to directly compete with the Model 3 Performance, the all-new BMW i4 M50 is the “first purely electric performance car” from BMW’s M division, and it’s not lacking in firepower; with 536bhp on tap, it’s more potent than the latest petrol-powered M3 (503bhp) and not far off the Model 3’s rumoured 563bhp figure (Tesla doesn’t publish official power figures).

BMW also promises that the range-topping i4 should be able to match the day-to-day usability of the Model 3 by combining the “fabled sporting prowess” of M cars with “a range that also convinces over long journeys”. To that end, it gets adaptive suspension with air springs at the back, and a large (80.7kWh) battery to keep it going for as long as possible.

Despite having the word ‘performance’ in its name, nothing about the Model 3 screams that you’re behind the wheel of a monstrously quick car. There’s no launch control, no motor noise and no gimmicky driving modes that ‘unleash’ maximum power or deliver ‘ludicrous’ acceleration. 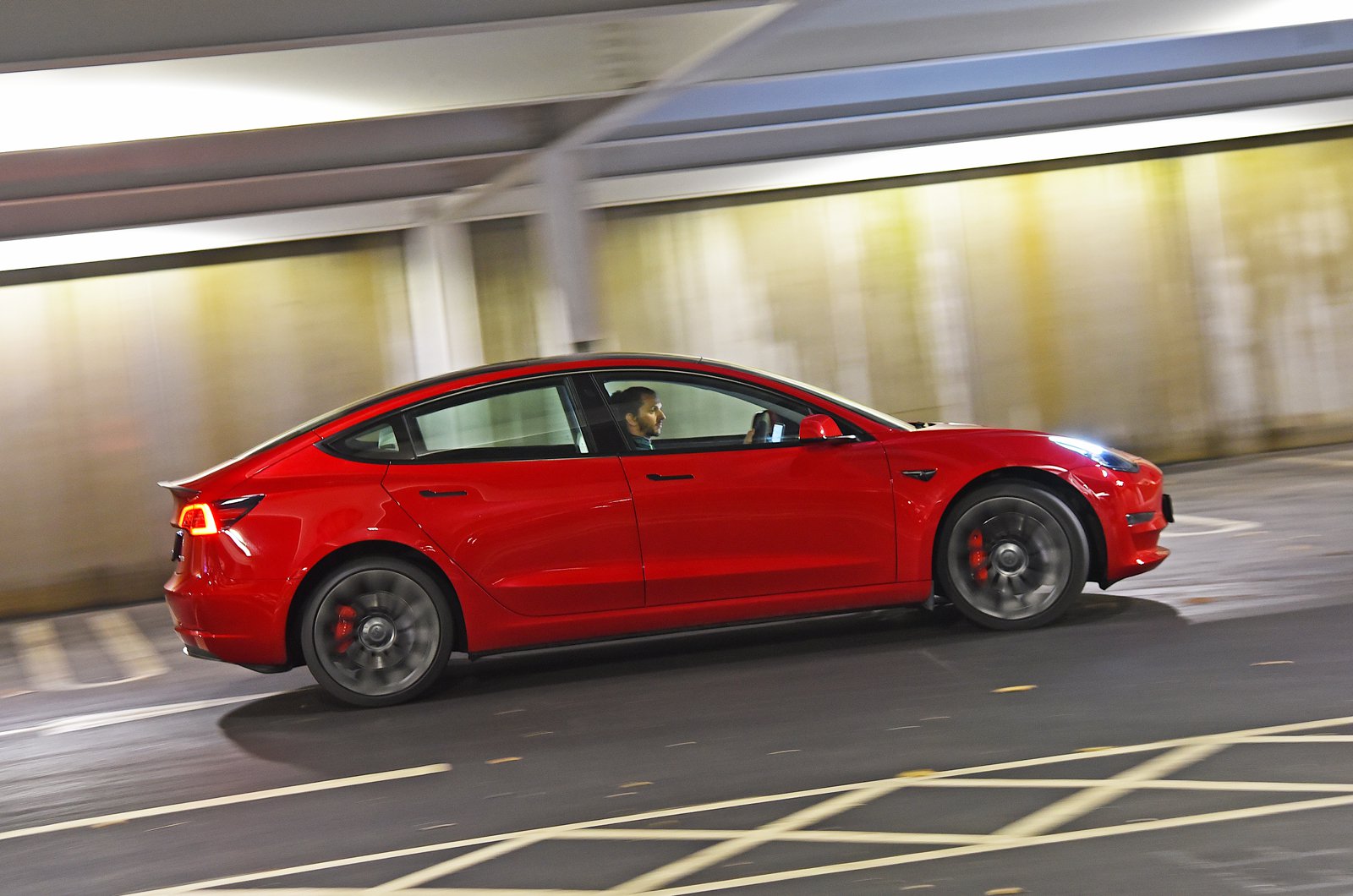 All you have to do to embarrass a supercar at the lights is deactivate creep mode (so you don’t have to hold the car on the brakes), stamp on the accelerator and hold on to the steering wheel for dear life.

And you really do have to hold on. Our Model 3 test car – in cold, wet conditions – returned a 0-60mph time of just 3.4sec. Not only is that quicker than a Porsche 911 Carrera S, but the Tesla nailed that time without generating so much as a chirrup of wheel-spin.

The i4, meanwhile, goes about its business in quite a different way. As well as having launch control, it features a ‘Sport Boost’ mode that give you access to the full 536bhp. You also get an Iconic Sounds function; when activated, this delivers a sonic ‘composition’ from film-score maestro Hans Zimmer that gets louder as your speed increases. 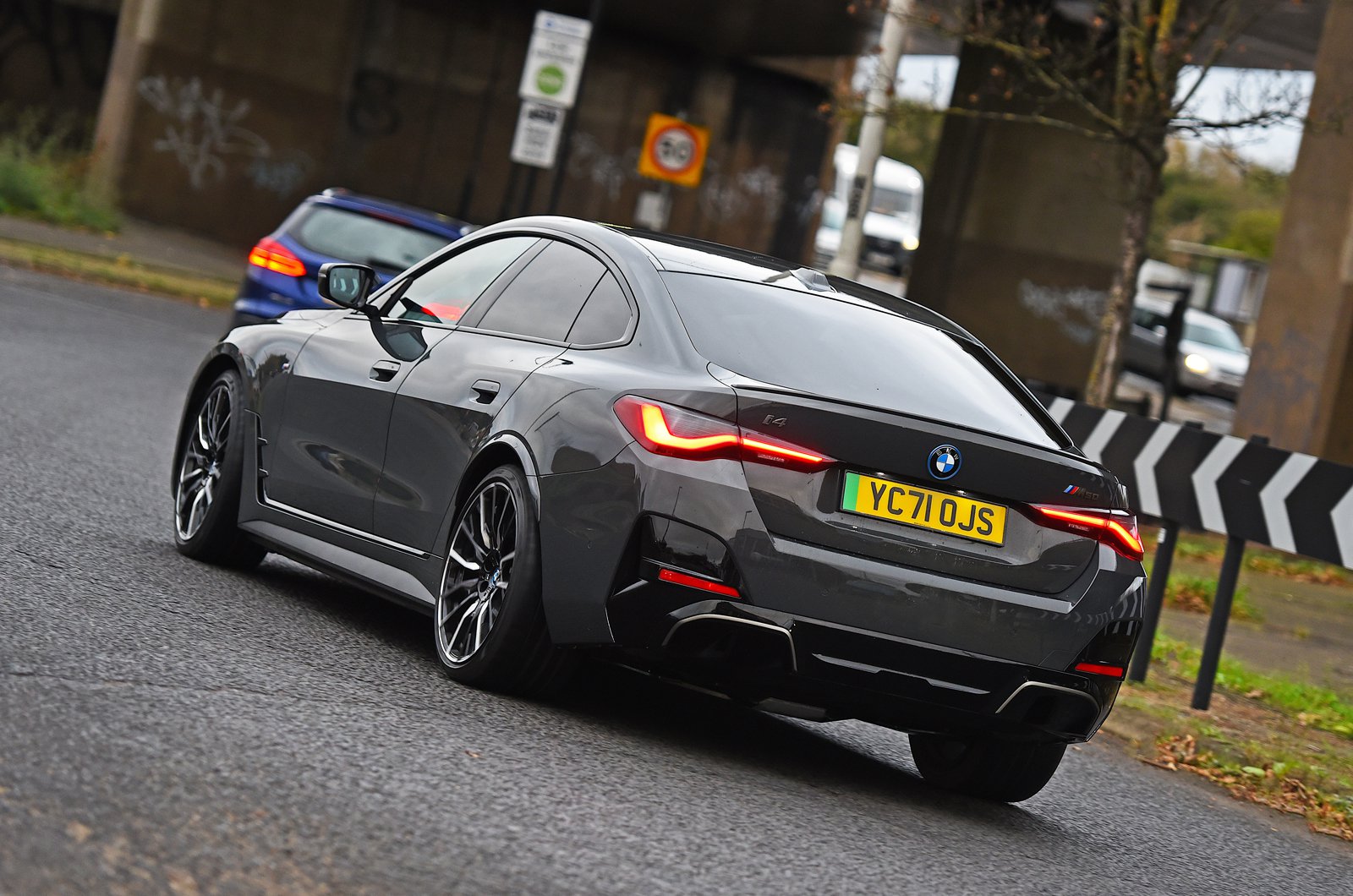 This sci-fi soundtrack, combined with the launch control, makes launching the i4 a more exciting experience, but check the stopwatch and you’ll find it is nearly half a second slower to 60mph. The reason? Well, it’s twofold. First, the i4 struggles for traction off the line, with its front wheels scrabbling for grip all the way to the national speed limit, despite the fact that it (like its rival) has four-wheel drive. And second, the i4 weighs roughly 350kg more than the Model 3, and not a great deal less than a Range Rover.

Now, it’s worth emphasising at this point that the i4 is still scorchingly quick by conventional standards – with a 0-60mph time of 3.8sec, it’s just as fast as an M3 – but there is simply no hiding that extra weight in corners. The i4 suffers more from body lean through quick bends, and that means it takes a moment longer to react when you ask it to change direction. And despite the fact that both cars are fitted with the same Pirelli P Zero tyres, the i4 also runs out of grip sooner.

Neither car has the sort of delicate, feel-some steering that the best petrol-powered performance saloons are blessed with. We reckon the ‘Standard’ steering weighting is preferable in the Model 3 and ‘Sport’ is best in the i4, but whichever setting you choose, the i4’s steering is slower and more relaxed, while the Model 3’s is sharp and direct. We prefer the extra precision afforded by the Tesla’s faster steering when driving quickly, but the i4’s steering suits its more relaxed demeanour. 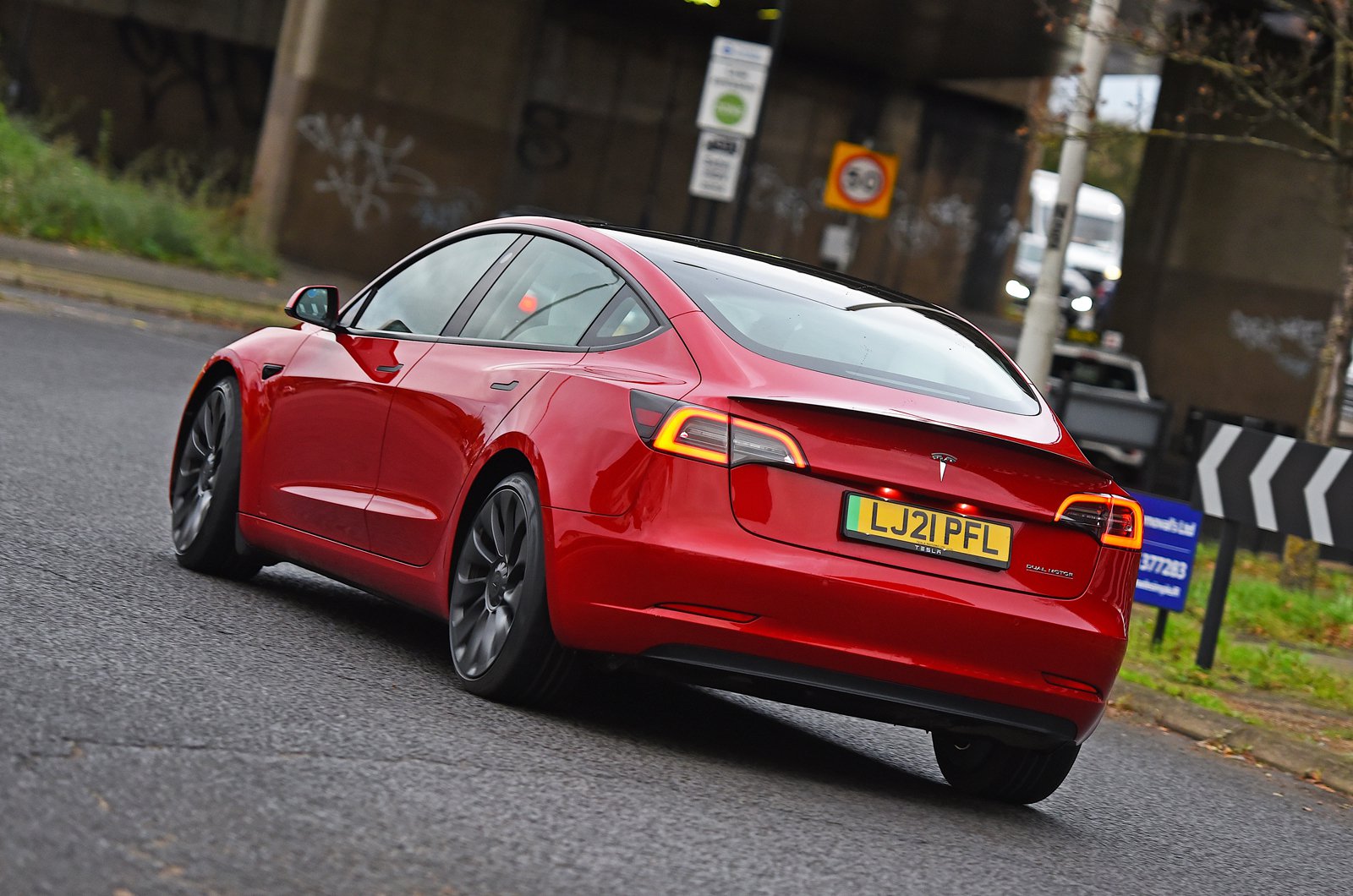 Speaking of which, the i4 is, without a doubt, the more relaxing car in which to cover big miles. With its suspension in Comfort mode, it’s particularly smooth and controlled at motorway speeds, while around town it does a much better job of rounding off sharp abrasions and cushioning you from harsh impacts. It also suffers much less from wind and road noise than the Model 3, whose frameless side windows create quite a bit of buffeting at 70mph.

The Model 3 hits back, however, with a significantly better range. With both cars’ batteries charged to 90%, we drove a route that included simulated motorway, country roads and town driving (in convoy at our test track so that traffic conditions wouldn’t influence the results) and the Model 3’s trip computer claimed it had returned 3.1 miles per kWh, giving it a theoretical range of 233 miles.

The i4, meanwhile, was slightly less efficient, using a kWh every 2.3 miles, giving it a theoretical range of 185 miles. It was jolly chilly, though, with an air temperature of around 3deg C.