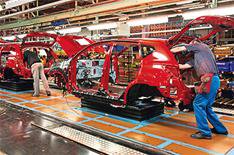 The number of new cars registered in the UK during January fell by 30.9% year-on-year.

Figures from the Society of Motor Manufacturers and Traders (SMMT) revealed the total number of cars sold fell to 112,087 during the first month of 2009.

The news comes in the wake of the Government's 2.3 billion aid package designed to help increase sales of new cars.

The scheme has been criticised by many car makers for not doing enough to boost hopes of a revival in the market.

The SMMT's chief executive said: 'There is a clear need to stimulate demand for new vehicles in the UK market.'