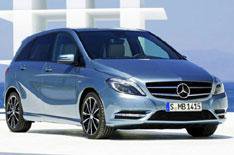 An image of the next Mercedes-Benz B-Class has been leaked on to the internet.

While we've already seen the new car's interior, this is the first time we've seen the outside of the family car that'll be launched at the Frankfurt motor show before going on sale next spring.

What do we know about the B-Class?
Compared with the current car, the new B-Class is lower, longer and wider. From the leaked photo, the front end is expected to be a toned-down version of the Concept A-Class model that was unveiled at the Shanghai motor show earlier this year.

Mercedes has already said the B-Class is more aerodynamic than its predecessor, which helps to reduce fuel consumption and CO2 emissions. The drag coefficient has been cut from 0.30 to 0.26, thanks to a range of features that channel airflow over the car. An Eco Technology package that includes lowered suspension and additional aerodynamic aids will drop the figure to 0.24. It'll be available as an option later in 2012.

Underneath, the B-Class doesn't use the 'sandwich floor' concept that the current A-Class and B-Class use, where the engine is mounted at an angle and slides under the passenger compartment floor in a front-end collision. Instead, the new model has a lower floor and a longer front end, with particular attention paid to energy-absorbing members that keep the passenger compartment intact.

The new floorplan has been developed to accommodate various powertrains; eventually there's likely to be an all-electric version, an electric range-extender model and a version powered by hydrogen fuel cells.

At launch, however, there'll be a choice of four all-new conventional engines. There are 1.6-litre turbocharged petrol units with 121 or 154bhp, both of which have been engineered to provide high torque at low revs. Mercedes aims to reduce the gap between the official fuel consumption figures and real-world use by making the engines as flexible and efficient as possible.

Advanced safety kit
A huge range of active and passive safety features will be fitted as standard or available as options for the B-Class. Collision Prevention Assist which uses radar technology to monitor the road in front and warn the driver if a collision is imminent will be fitted as standard. Every B-Class will also come with Attention Assist and front, side, curtain and driver's knee airbags. Rear side airbags will be available as an option.

Have a closer look around the B-Class's dashboard. Simply click on the icon in the bottom right corner of the photo below, then move your cursor around the photo for a closer look. The icon may take a few moments to load.