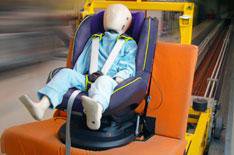 The independent and comparative data will be created and provided by the Transport Research Laboratory (TRL).

Seats will undergo new front and side impact tests, along with usability trials, in the rigorous new TRL assessment.

Vital new information on child seats that could offer more protection in an accident, or make the seats easier to use, will be available for the first time.

An overall rating out of five will be awarded, with results published on the TRL website at www.trl.co.uk and highlighted in stores by major child seat retailers, such as Halfords.

Based on Government tests
The tests are based on the Government's New Programme for the Assessment of Child-restraint Systems (NPACS) testing protocols.

The tests aren't compulsory, but it's hoped that once the first set of results are published, seat manufacturers will be under pressure to put their seats forward for testing.

The service is expected to go live in early 2010.