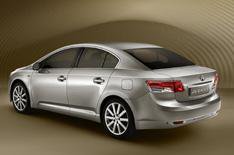 This is the new Toyota Avensis, which will be shown in the metal for the first time at the Paris motor show on October 2.

The new Avensis will go on sale in the UK in January 2009, and is said to carry over the existing car's core values of space, reliability and refinement.

Although technical details are scarce, the engine line-up is expected to closely reflect the existing range, albeit with refinements to increase power and lower emissions.

The new Avensis will be built in Burnaston in Derbyshire, with prices being announced later this year.

Other show stars
As well as the new Avensis, Toyota will also be showing production versions of its new iQ city car and Urban Cruiser small 4x4.

Previously shown as concept cars at the Geneva and British motor shows, both are set to go on sale in early 2009.

The iQ four-seater is less than three metres long, but has been designed with an emphasis on safety features protecting all passengers. As a result, it will have a new type of airbag, called the curtain shield, which is installed behind the rear seats.

No details of the engine line-up have been revealed, beyond the fact that there will be a model that emits just 99g/km of CO2. That places the iQ just behind the Ford Fiesta Econetic, which will emit 98g/km of CO2.

The Urban Cruiser on display will be powered by a 1.4-litre diesel engine and has four-wheel drive. Emissions will be 133g/km, making it the cleanest 4x4 on sale.