Toyota has long been at the vanguard of hybrid technology, but the bZ4X is its first modern electric car. How does it compare with two of the most exciting alternatives?...

Toyota is arriving at the party quite late, but the bZ4X has an impressive official range and is cheaper to buy than its rivals here, so it promises to be a serious threat

Infused with the heritage of the Mustang sports car, the Mach-E ought to be the sporty choice here. It has the most power but the shortest official range

Our reigning Car of the Year is a very complete package, with a whopping 328-mile official range and ultra-fast charging capability. It’ll be tough to beat

Next time you brake from 20mph, just imagine what it’s like for the captain of a supertanker. Stopping from that speed in one of the world’s biggest vessels takes around 20 minutes and up to two miles.

The point is that bigger things take longer to slow down and change direction, and there’s no bigger maker of cars than Toyota. That could be partly why it’s been so slow to react to the shift towards fully electric vehicles (EVs); nearly all of the 10 million cars the company built last year had a petrol or diesel engine under the bonnet, albeit with hybrid electrical assistance in many cases. 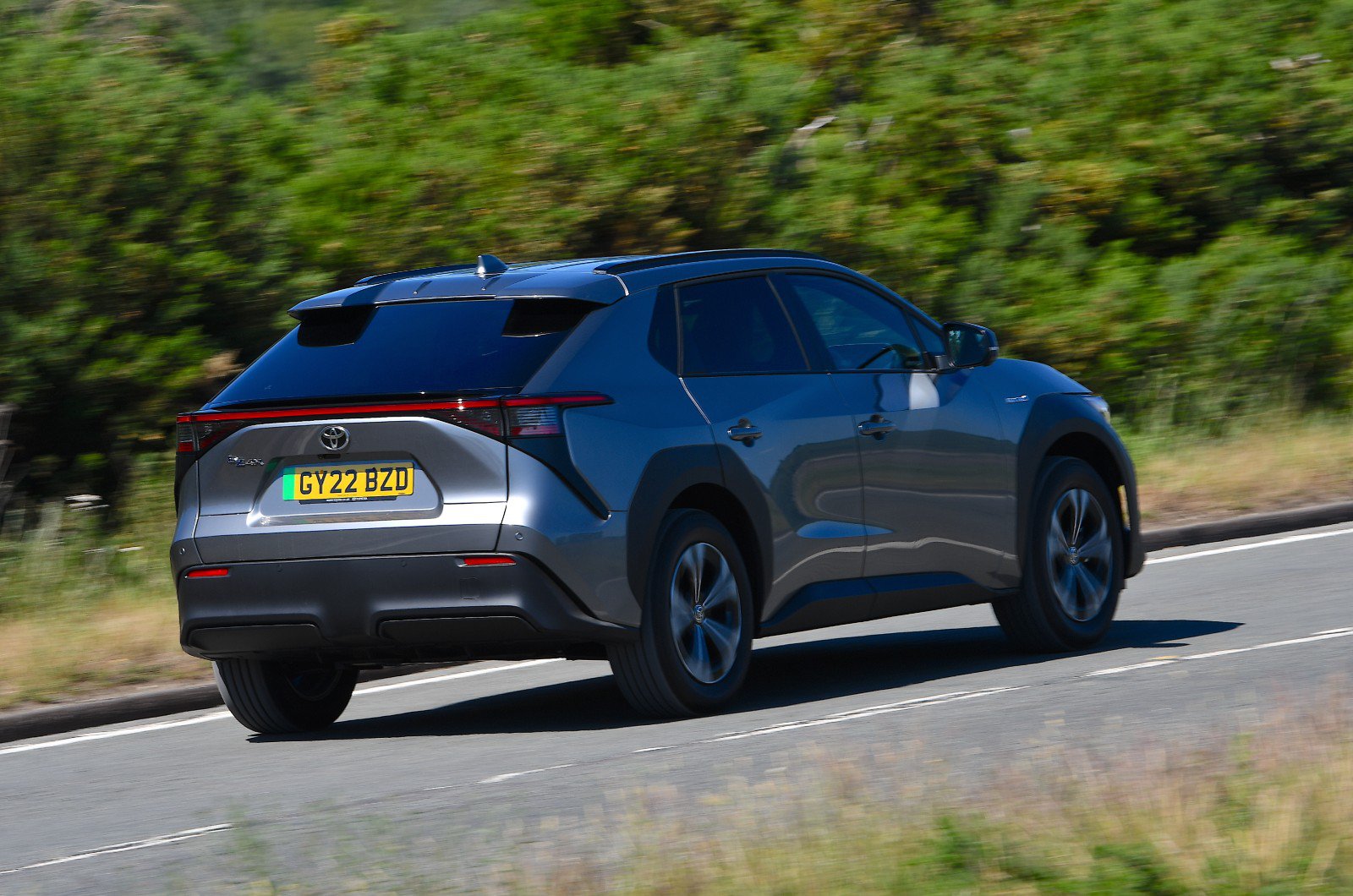 But that’s about to change, because the Toyota bZ4X has just become the company’s first bespoke battery-powered EV. It’s an SUV that’s about the same size as the Toyota RAV4, but it sits on brand new EV underpinnings that will eventually spawn a family of longer, shorter, higher and lower bZ models.

The baptism of the firstborn couldn’t be any more fiery, though, because one of the bZ4X’s closest rivals happens to be our 2022 Car of the Year, the Kia EV6. Even if you think it isn’t quite tall enough to count as an SUV (for the record, we think it just about is), it’s a car with very few objective shortcomings. 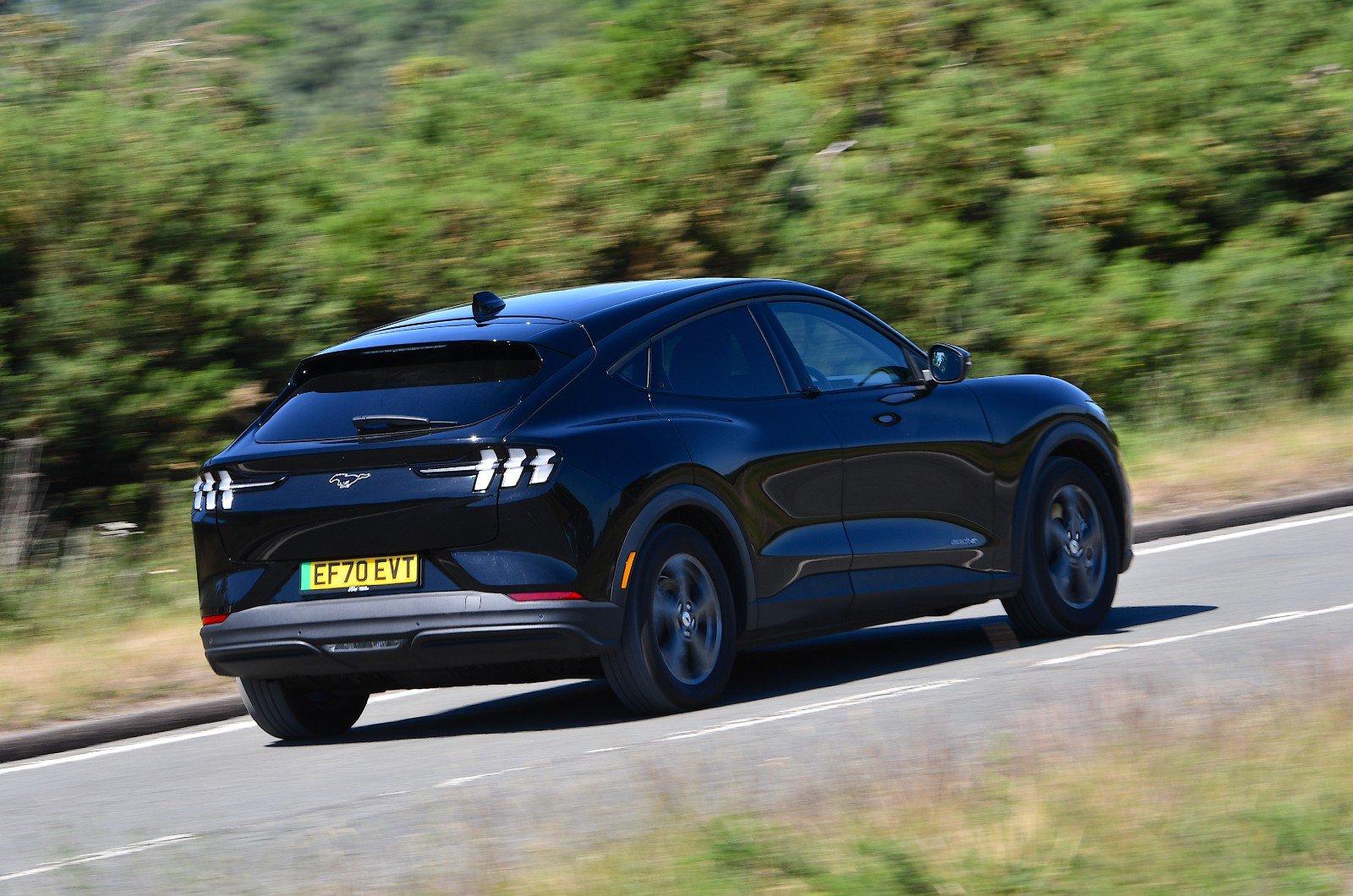 Our third contender was actually one of the first pure electric SUVs from a mainstream brand. The Ford Mustang Mach-E may not display any blue oval badges, but it’s very much a Ford, and history suggests that means it’ll be great fun to drive. Like all three cars, it’s appearing here in two-wheel-drive guise for the best possible efficiency and a respectable price.

Despite its evocative name, the Mach-E is not capable of breaking the sound barrier, but thanks to a 265bhp electric motor driving the rear wheels, it can still hit 60mph from a standstill in a suitably quick 6.6sec. 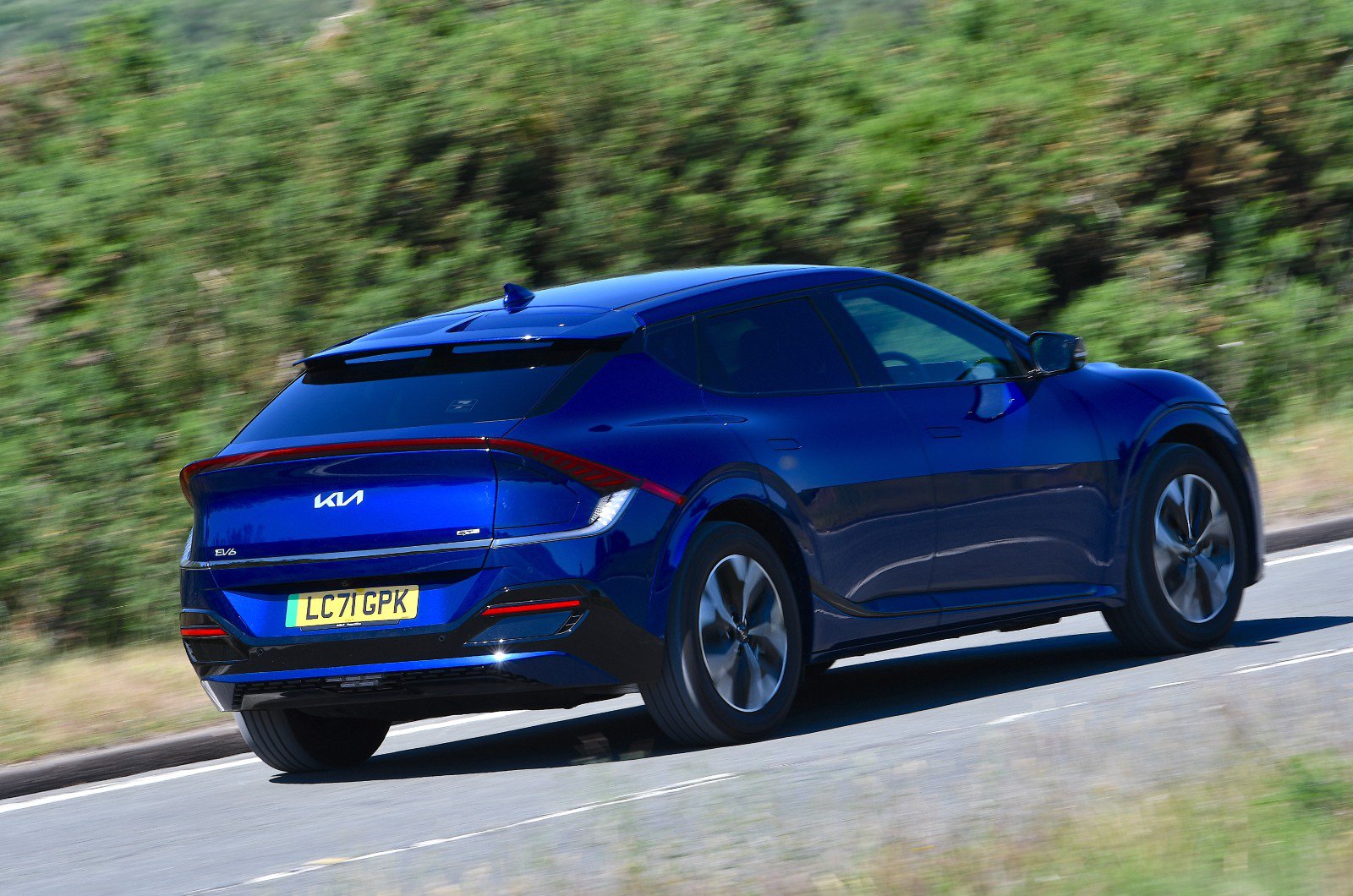 Neither rival packs as much punch, with the bZ4X making do with ‘just’ 201bhp and the EV6 with 226bhp. But considering their relative power deficits (and the fact that the bZ4X sends its power to its front wheels, giving it less traction), their 0-60mph times are still sprightly, with the bZ4X clocking 7.1sec and the EV6 7.2sec. In fact, it’s only when you’re making an overtake on a country road or joining a motorway that you really feel the benefit of the Mach-E’s extra grunt; it’s half a second quicker than the EV6 from 50-70mph and a full second quicker than the bZ4X.

But when it comes to EVs, performance isn’t just about how quickly you can speed up; how far you can travel between charges is even more important for most. On a simulated test route of motorways, country roads and town driving (at our test track so that traffic conditions wouldn’t influence the results), the Mach-E proved to be the most efficient, returning an impressive 3.7 miles per kilowatt hour (kWh), followed by the EV6 (3.6 miles/kWh) and bZ4X (3.5 miles/kWh). Now, those might look like small differences, but extrapolate the figures over a full charge and you’ll find that the bZ4X has a shorter real-world range than the Mach-E (250 miles versus 259), despite having a larger battery. 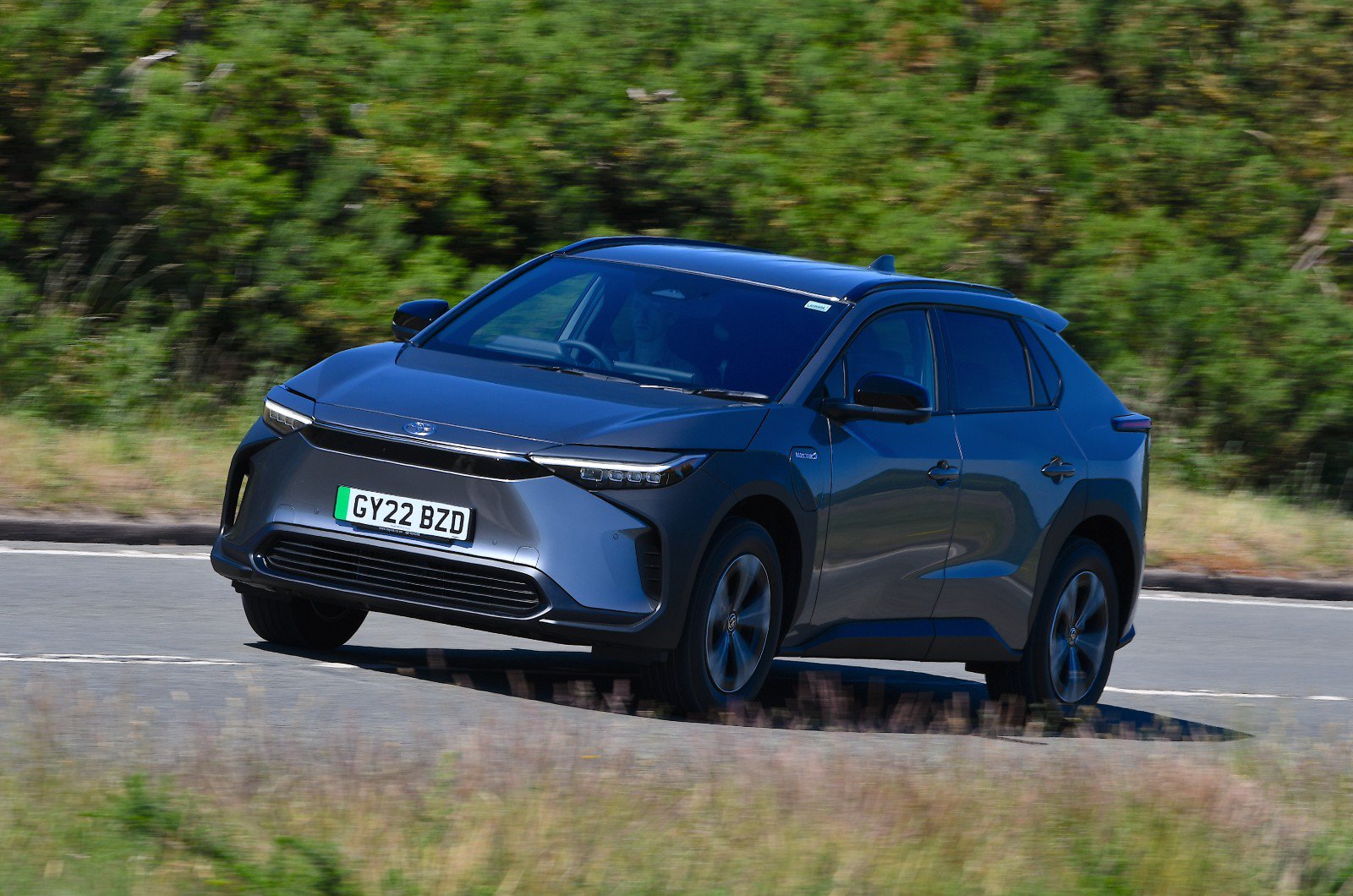 The EV6, meanwhile, may not be quite as efficient as the Mach-E, but it has a significantly larger battery than both of its rivals (77.4kWh) and therefore has the longest real-world range of 279 miles. And while that’s still some way short of the 328-mile official figure, it’s worth keeping in mind that it was hot on the day of our test (27-29deg C), so the air conditioning systems of all three cars were working overtime to maintain an interior temperature of 21deg C.

With such an impressive range, it’s a good thing that the EV6 is also a pleasure to cover miles in. It does an excellent job of smoothing out broken sections of bitumen and its body movements always feel well controlled, especially on undulating country roads. And while the bZ4X is a touch more settled at fast motorway speeds, that car doesn’t cushion you quite as well from road scars in urban environments. 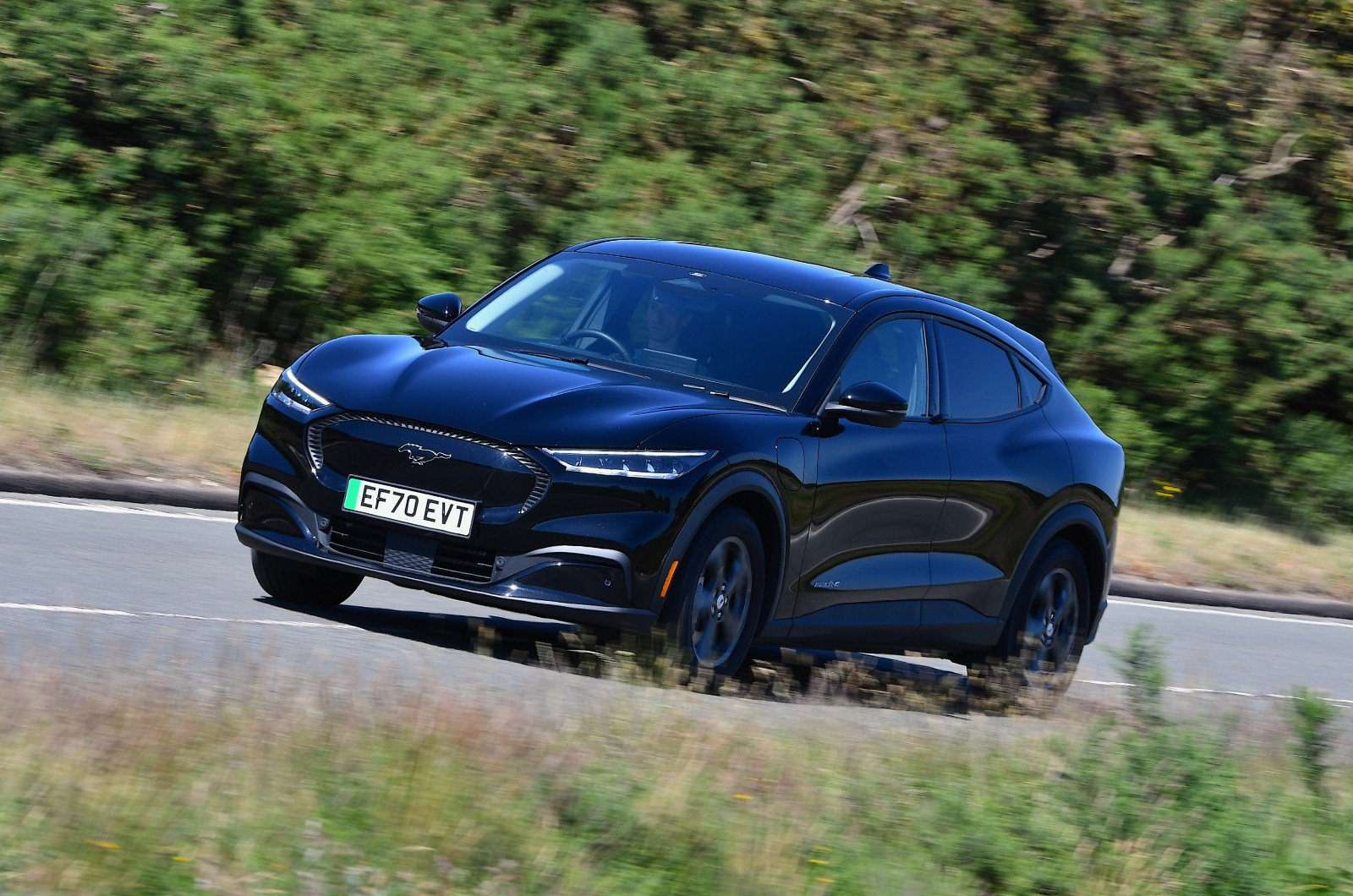 The Mach-E, meanwhile, is light years behind when it comes to ride quality. Its suspension absorbs the initial hits of potholes and ridges well enough, but the aftershocks are brutal, making the car buck like an angry mule. It’s a genuinely unpleasant car to travel in because of this, and things don’t improve with speed, with the car feeling unsettled on the motorway, jostling you around incessantly.

Such a reactive set-up doesn’t help with handling, either. It’s respectable when the road is super-smooth, but that’s very rarely the case – and the Mach-E is frequently nudged off line by mid-corner bumps. Throw in quick but overly elastic steering and grabby, poorly judged brakes and it becomes almost impossible to drive smoothly in the Mach-E. 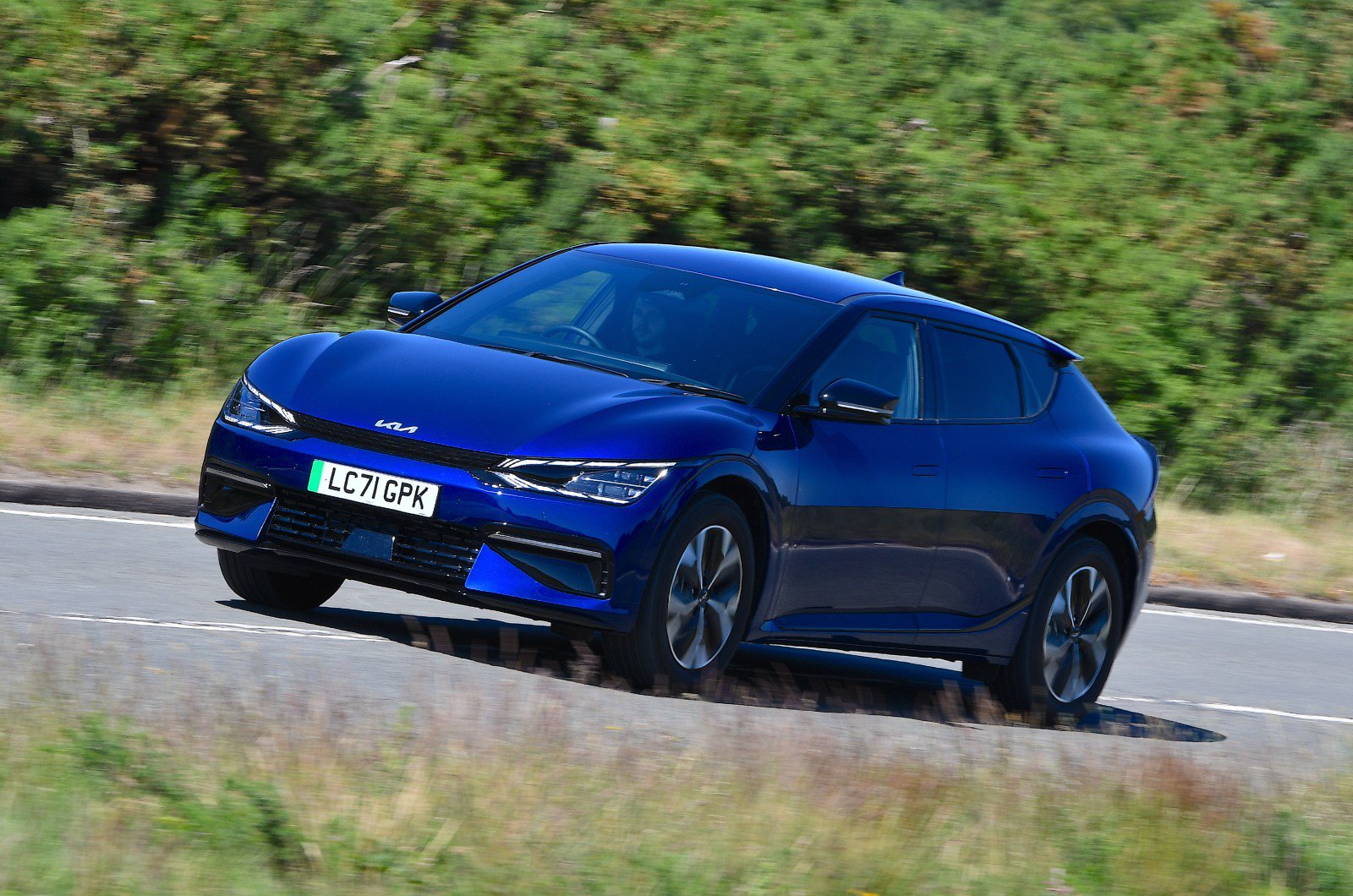 If you like cars that flow down the road like joined-up writing, you’ll prefer the EV6 and bZ4X in almost every respect. Both benefit from impressive body control, naturally weighted steering and progressive brakes. The EV6 just has the edge when it comes to entertainment; its rear-wheel-drive layout allows you to rotate the car into corners and its steering is more communicative (giving you a better sense of what’s going on under the front wheels) – but both cars are a pleasure to guide down a country road.

The EV6 gains points by being the quietest, too, with the least tyre and suspension noise at motorway speeds. There’s a noticeable amount of both in the Mach-E, but the bZ4X is the loudest overall, with wind noise from around its door mirrors and suspension noise from its rear axle combining to create the highest decibel reading at 70mph. It’s not as if you’ll need to wear earplugs, though. 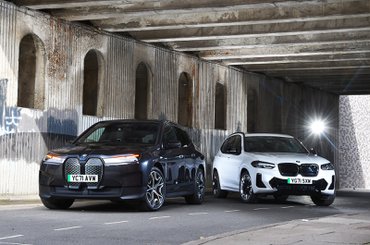 The BMW iX takes a clean-sheet approach to facing the future, but does that make it a better electric SUV than the less radical iX3?