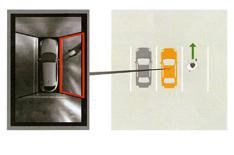 You've just dropped off the children at school, and in your rush to get to work you haven't spotted others around the car as you manoeuvre into the traffic. Your car has seen the danger, though, and it's showing it on a screen in the dashboard while beeping loudly.

Nissan says that in Japan alone 200 people a year inadvertently kill one of their own children while manoeuvring outside home or school.

However, it is now working on a system that will prevent such accidents, and will make it available within two years. Called Moving Object Detection, it gives drivers a 360-degree field of vision. It spots anyone within five metres of the car's front or rear, and four metres to either side.

All-round collision-free
It is part of Nissan's 'all-around collision-free' safety programme, and it can also prevent the kind of accident that might happen when you're reversing out of a supermarket bay. Radar sensors in the sides of the car can detect other vehicles approaching within 20 metres and bring you to a halt.

The company is trying to establish what it calls a 'safety shield' around its cars in an effort to halve the 1995 level of fatalities and serious injuries to Nissan or Infiniti drivers and passengers by 2015. Ultimately Nissan wants to reduce them to 'virtually zero'. In the UK, the company is already ahead of its target.

Imagine you're driving home and you're briefly distracted. Suddenly the traffic ahead starts braking, but you don't react. Your car spots the danger and starts to slow. If you still don't respond, it brakes hard. As long as you're travelling below 60kph (37.5mph), a potentially serious accident will
be avoided. Nissan claims it works even in heavy rain.

Nissan hopes to have the system available within two years. Volvo's City
Safe has been around since 2008, but works up to only around 19mph, while
the upgraded version of Pre-Safe Brake was introduced on the 2009 Mercedes
S-Class and CL.

Mercedes does not quote a speed range in which its system works, but says initial braking is instigated 1.6 seconds before an impending crash and fullbraking a second afterwards.