* Nissan Terra concept car * Will be at 2012 Paris motor show * No plans for a production version... 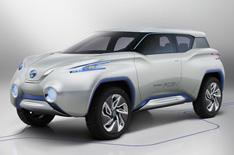 This is the Nissan Terra concept car, which will make its debut at the 2012 Paris motor show later this month.

Nissan describes the Terra as a 'compact, zero-emission SUV'. It has three electric motors, which are powered by a hydrogen fuel cell stack located under the boot floor.

The powertrain from the Nissan Leaf drives the front wheels, while each of the rear wheels has an in-wheel electric motor. Power and performance figures haven't been released.

The Terra's futuristic exterior design is echoed by a cabin that has 'Nordic themes' and uses blonde wood, acrylics and metals.

Instead of an instrument panel there's an iPad-style tablet, which also serves as an 'intelligent key'. It can be removed from the car and used like any other tablet, and it continues to keep in-touch with the car's systems.

Nissan says the Terra is a pure concept car, designed to highlight its ability to produce fuel cell electric vehicles

All three passenger seats can be folded down flat, while the seating has a diagonal layout, with the driver's seat farther towards the centre of the car than usual.

Cabin has 'Nordic themes' and a diagonal seating layout

Nissan says the Terra's design doesn't preview the next Juke or Qashqai, but we'd be surprised if some of the design elements failed to filter through to its future models.