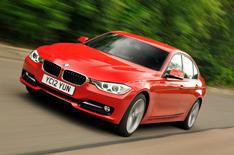 The BMW 3 Series has now won the What Car? Executive Car of the Year Award for two years on the trot. So, running one on the What Car? fleet for the past 12 months and 24,000 miles has been less of an exercise in deciding just how good it is, but more a case of finding out whether it has any flaws at all.

Just to recap, the model we went for was the 320d Sport. At the time, the more frugal ED version (our 2013 award winner) wasn't on sale, neither were the Touring and GT variants.

Our car came directly from BMW's HQ, so we didn't have any choice on spec in fact, it was more lavishly equipped than ideal. However, I certainly valued the 325 digital radio and was always grateful that the car came with BMW's full-house 'Professional' infotainment system, although it is a shade under 2000.

The optional red metallic paint, 18-inch double-spoke alloys and brushed aluminium trim made it look exceptionally smart, too. In fact, I've yet to see a tidier looking Three on the road.

However, I could have easily lived without the optional leather, folding mirrors, adaptive lights and the 800 head-up display. All are nice to have, but not worth pushing up the purchase price for.

Two options certainly worth considering are the eight-speed auto 'box and the adaptive M Sport suspension because both do a lot to improve the driving experience.

Going for the fancy suspension makes a remarkable difference to the way the Three rides and handles because one of the car's computers manages each individual damper and adjusts it according to road conditions. It works well, too my car always did a much better job of serving up a supple ride and stopping the body moving about than standard versions I've driven.

I never regretted the optional auto 'box either. It's brilliant. In fact, it didn't get ruffled once. It was always in the right gear, never felt ponderous and always seemed to make the most of the 2.0-litre diesel's prodigious poke. It also makes financial sense, being one of the rare examples of an auto that lowers Government CO2 emissions figures dropping it a company car tax band in the process.

These crucial extras contributed to my abiding memory of the 320d: just how brilliant it was to drive. It was agile enough to be huge fun on twisty back roads, but played the role of beautifully mature motorway cruiser, when required. It traversed the country many times, and made several trips to Europe and none of us ever complained about comfort. Some readers have had bother with the Sports seats that come as standard with this model, but my What Car? colleagues of all shapes and sizes never had reason to grumble.

It wasn't perfect, of course. There was a mite too much wind noise at high speeds, and while that diesel engine is perfectly restrained at higher revs, it was always too vocal around town especially compared with newer diesels such as our Mazda 6 long-term test car.

However, few can compete with its economy. Our car spent a lot of time chugging through London, plus a fair chunk being driven hard everywhere else and it emerged with an overall average economy of 49.8mpg. More time cruising and it would have easily been in the early 50s and closer to our True MPG figure of 56.1. That's remarkable for a car of the BMW's size and performance.

Other running costs haven't been ruinous either. Even after 24,000 hard miles the rear tyres still have life left in them, although I had to fork out 195 to replace a front one after it whacked a kerb. I also managed to get the 19,000-mile service sorted for 254 at a Hertfordshire dealer, which was a full 100 cheaper than outlets closer to London were quoting.

Sadly, that wasn't the only dealer visit. I noticed that the air-con and heater blower was getting noisy and after mentioning it on whatcar.com several of you emailed saying you'd had a similar problem and needed a new control unit. That was, indeed, the issue and it was painlessly replaced under warranty by Coopers of Thames Ditton.

So, has the BMW 320d Sport has lived up to its promise? Yes and then some.

That said, if I had my time again, I would spend the extra on the Touring version. The saloon's rear seats are capacious enough for six-footers, but I ran out of boot space several times. I'd also give serious consideration to going for the Efficient Dynamics model. It's plenty fast enough, can be equipped with an optional auto 'box, and the deal is sealed by fact that a colleague of mine regularly achieves more than 70mpg in his.

In reality, any 3 Series is head and shoulders above the competition and now we don't just have What Car? comparison tests to prove it.