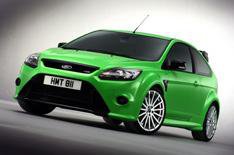 The 2.5-litre petrol engine from the Focus ST is under the bonnet, but a larger turbocharger has increased its output from 222 to 295bhp. Thats enough to propel the RS from 0-60mph in under six seconds and on to a limited top speed of 155mph.

However, the RS isnt four-wheel drive. Traditionally, high power outputs and front-wheel drive result in the undesirable phenomenon of torque steer, when the steering wheel is tugged left and right in your hands as you accelerate hard. Ford, though, reckons it has countered this by reworking the suspension and fitting a clever differential to reduce wheelspin.

As far as looks go, its probably fair to describe the RS as a wolf in wolfs clothing. Its got 19-inch wheels, an aggressive nose, a front splitter, louvres cut into the bonnet, deep side skirts, gills behind each front wheelarch, a big spoiler on the roof and large-bore exhausts. Inside, you get Recaro buckets seats to hold you firmly in place.

The last RS was available in any colour as long as it was blue, but the forthcoming car wont be restricted in the same way. The final colour options havent been confirmed yet, although the luminous green shown at the British Motor Show is likely to be among them.

Still, not knowing what colour you can get the car in hasnt put buyers off, with Ford taking more than 1000 orders already. Thats more than a quarter of the 4000 cars allocated to the UK from the lifetime run of 8000 vehicles worldwide.

Alfa Romeo 8C Spyder
Price from Pick a number
On sale Its sold out
Whats great? Stunning looks, wind in your hair at 180mph

Production of the convertible version of the 8C Competizione supercar starts next year, but if youre thinking about ringing up to reserve one, its too late.

The UK is likely to be allocated about 50 of the limited-to-500 production run, and by selling the cars long before the words credit and crunch came into fashion, Alfa Romeo has many more Brits than that already lined up.

That means the only chance of getting your hands on one of these 450bhp 4.7-litre V8-engined beauties with its sculpted carbonfibre body is to dig deep into those pockets to prise one away from someone who did join the queue in time.

List prices havent been made public, but we reckon that the fluctuating exchange rate means youll be spending close to 150,000.

Mercedes has long been a purveyor of cars that are rapid and luxurious, but its really gone out of its way to grab your attention with the new SLC.

The gullwing doors may be a blast from the past, but the performance is entirely a la mode the SLC will hit 60mph from rest in under four seconds and go on to 190mph.

The car is powered by a front-mounted version of AMGs 6.2-litre V8 engine, with around 580bhp and 480lb ft of pulling power. All that force is delivered via a new seven-speed, double-clutch gearbox, which should ensure rapid, near-seamless shifts.

The car is based around the same mechanical package as the SL63 AMG, but an aluminium spaceframe and liberal use of carbon fibre keep the weight down to 1650kg.

Inside, however, sources indicate that Mercedes wont compromise on its usual luxury touches in the name of shaving off the kilos to boost performance. The companys philosophy is that its customers should expect comfort as well as power.

Heres an Aston Martin James Bond is unlikely to be seen in. Why? Because everyones favourite secret agent isnt known for needing four-door practicality as he cruises around with his latest squeeze in the passenger seat.

Its a shame, as hed certainly appreciate the 480bhp 6.0-litre V12, which is expected to launch the car from 0-60mph in around five seconds with a top speed of around 180mph. There are also carbon ceramic brakes, just to make sure the car stops as well as it goes.

This is one Aston that isnt just about performance, however. The hatchback body and four doors are very useable, and the rear seats even fold down to enlarge the boot.

The cabin will have all the high-class wood and metal touches that befit an Aston.

Performance and practicality in an Aston Martin? Youd better believe it.