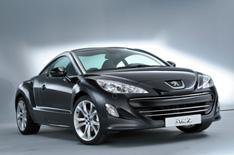 Peugeot's sexy new RCZ coupe is making its final motor show appearance at Geneva before it goes on sale in the spring.

What is it?
This is the production version of Peugeots classy coupe which was first revealed in concept form at the Frankfurt motor show more than two years ago.

Thankfully, much of the exciting detail from that design study has survived to the road-going version, which you'll be able to order now. It goes on sale in May.

That means youll get the aluminium roof rails arching over your head from the windscreen to the pert rear of the car, although youll also be able to specify different finishes if you like. The racing car-inspired 'double-bubble' roof has been retained, too.

A range of personalisation options will be available, including 19-inch alloy wheels, carbon roof panels and directional lights.

Does its performance match its sporty looks?
Peugeot has given performance details for only the flagship 200bhp 1.6-litre petrol-powered model so far. It can hit 62mph from a standstill in 7.6 seconds while returning 39.8mpg on the combined cycle and emissions of 165g/km (putting it into the 21% company car tax band).

The 156bhp 1.6-litre petrol is slightly more efficient, returning 40.9mpg and 155g/km. It should still be good for a 0-62mph time of less than nine seconds, however. As well as the standard six-speed manual, this engine will be available with a six-speed automatic.

What will it be like to drive?
Peugeot says the RCZ will have a sporty character. To help achieve this its lower than the 308 hatchback its based on and it also has a wider track for a more squat look and, hopefully, less body lean and more grip through the corners.

Peugeot says it has revised the suspension and braking systems and installed a special anti-roll bar in the 200bhp car. At the back, a pop-up spoiler lifts into two different positions depending on speed.

Anything else?
Alongside the production model, Peugeot is also planning the RCZ Hybrid4. This version matches an electric motor with a diesel engine, to achieve emissions of just 95g/km. Its likely to go on sale some time after the hybrid version of the Peugeot 3008, known as the 3008 Hybrid4, which will hit showrooms in summer 2011.