Both the BMW M235i and Peugeot RCZ R have sleek looks and powerful engines, but these coupes also need to be fun to drive and offer a dose of practicality, too... 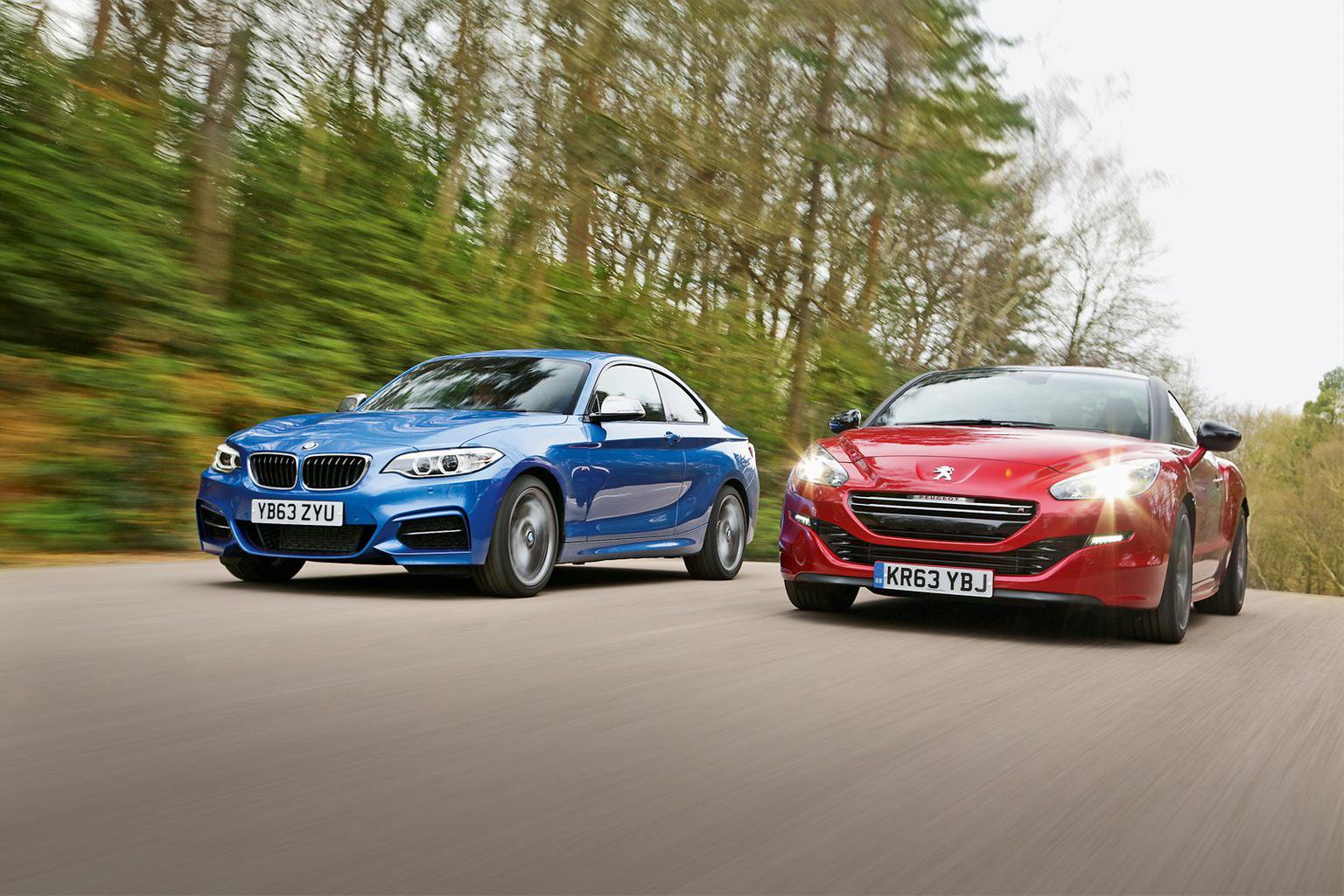 The BMW M235i has all the makings of a classic. For starters, it’s based on one of our favourite hot hatches (the M135i) but it’s lower, stiffer and more powerful, so should be even better to drive.

On the face of it, then, Peugeot’s RCZ may not seem much of a challenge. However, this is no ordinary RCZ – it’s the new high-performance R version, which has been thoroughly re-engineered to make it faster, more capable and a lot more fun.

The BMW’s 3.0-litre turbocharged engine produces 322bhp, giving it the sort of pace to frighten Porsche 911s – let alone other £30k coupes. Push it to its limits and you’ll hit 60mph in just 4.9 seconds, but no matter what the revs or the gear you’re in, a gentle squeeze of the throttle will have you gaining speed very quickly indeed.

The six-cylinder engine sounds fantastic, too, pumping out a bassy growl at low speeds and an rasping howl as the revs rise above 4000rpm.

The RCZ R uses the same 1.6-litre turbo engine as lesser RCZ models, but with the power boosted to 267bhp. It’s certainly quick – 0-60mph takes 5.7 seconds – although clearly no match for the BMW in a straight line. It doesn’t sound as good, either; it’s loud and boomy rather than especially tuneful.

The tables are turned when the road starts to twist, though. The RCZ R changes direction sharply, staying flat in hard cornering, and clawing its way out of bends with staggering verve. Peugeot’s new limited-slip differential is the hero here, letting you hold your chosen line securely as you feed in the power.

It’s just a pity you don’t feel a bit more involved in the action. The steering is the biggest hindrance, feeling vague and numb during hard cornering. The BMW’s steering is quicker and more accurate, but again you won’t get a huge flow of sensation to your fingertips.

You might imagine that the rear-wheel-drive BMW would handle better than the Peugeot. In fact, the M235i’s front tyres run out of grip earlier and there’s more body lean, which limits the speed you can carry through bends. You’ll still have plenty of fun, though, not least because you can adjust where the nose is pointing by using the throttle.

Our test M235i came with adaptive suspension (a £515 option), and in Comfort mode the ride is pretty supple – although you’re jostled about a bit at low speeds. The Peugeot, while firmer, actually rides more fluently than other RCZ models, and is less crashy over potholes and broken surfaces.

The BMW is the more refined cruiser, with road and wind noise better suppressed on the motorway. The M235i’s six-speed manual ’box is a little notchy (we’d recommend spending an extra £1545 for the excellent eight-speed automatic ’box), but it’s still better than the RCZ’s, which has a long and rather imprecise action.

Climb into the RCZ R’s heavily bolstered Alcantara sports seats and it’s immediately obvious that this is no run-of-the-mill model. The bright red stitching on the steering wheel and the leather-wrapped dashboard are both giveaways, and there’s a polished aluminium gearknob as well as a prominent ‘R’ plaque between the front seats.

The M235i’s interior, meanwhile, isn’t really any different from a diesel 1 Series hatchback’s. That’s fine if you value understated looks and classy materials, but you might wish for a bit more drama in such a high-performance coupe.

The BMW certainly has the more user-friendly dashboard, though. The buttons and climate controls are more conveniently positioned, while thw iDrive infotainment system is much easier to get the hang of than the equivalent system in the Peugeot.

If you plan on transporting more than one passenger you’ll definitely need the BMW. Its rear seats aren’t exactly spacious, but they’re fine for kids, and even six-footers won’t feel too hemmed in on short journeys. The RCZ is seriously cramped in the back. Carrying adults there is out of the question, and even small kids won’t relish being squashed in for long.

The 2 Series has the bigger boot, too. It’s significantly wider than the Peugeot’s and slightly taller. That said, both cars are capable of carrying a couple of large suitcases, and both have split-folding rear seats to allow you to carry longer items.

The RCZ is the cheaper car to start with, a price difference that grows to almost £3800 when
you factor in dealer discounts. However, the BMW is predicted to lose its value at a much slower rate, so is likely to be only £2000 more expensive to own over the first three years.

Company car drivers will also be better off with the Peugeot; its much lower CO2 emissions and cheaper list price mean that (as a 40% rate taxpayer) you’ll sacrifice £120 less of your salary each month to run one. The RCZ is also cheaper to lease by some £80 a month.

Both cars are range-topping versions, so it’s no surprise that they come with lots of gadgets, including climate control, xenon headlights, rear parking sensors, Bluetooth and a USB socket. The Peugeot even adds sat-nav and cruise control (expensive options on the BMW), but misses out on
a DAB radio.

Neither car has been crash-tested by Euro NCAP, but the BMW has six airbags – two more than the Peugeot – while both have tyre pressure monitors to give you early warning of a puncture.

The new R is easily the best model in the RCZ range. Peugeot's engineers could have simply added a bit more power and a few styling fripperies, so they’re to be congratulated on transforming what was a pretty mediocre coupe into a seriously capable performance car. In fact, if it were a bit more rewarding to drive quickly the RCZ may have won this match-up. As it is, the BMW wins because it’s just as much fun, yet is faster, easier to live with, classier inside and only slightly pricier to own.

Verdict Sports car quick yet easy to live with

Verdict The best RCZ by a country mile