More for you |
The most popular used car reviews of 2020LISTEN: Car of the Year PodcastNew issue of What Car? magazine on sale nowPromoted | 5 reasons why it makes sense to go electric todayBig savings on our Car of the Year Awards winners
Home
News
Pimp my sleigh: Santa's new ride
news 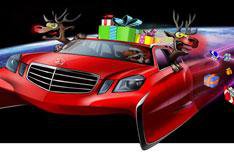 Every year Father Christmas wheels out his sleigh and nine reindeer to travel the world delivering presents. How old fashioned! Surely a new car would do the job more efficiently and comfortably?

This year, German news website Spiegel asked eight major car manufacturers to come up with an improvement, and it looks as though those reindeer could be heading out of a job and onto a menu.

BMW's designers based their sleigh on a Mini Convertible: a compact but chic way to travel, although we're not sure there's enough room in that tiny boot for many stocking fillers.

Porsche fitted skis in place of the front wheels on a Panamera to help glide Santa and his deer along in luxury; the presents will have to make do with a trailer and tow rope.

If Santa is hoping to attract attention he'd better opt for the racy red Mercedes sleigh: it looks like a cross between an E-Class estate and a high-speed catamaran. Plenty of room in the back for the pressies, too.

Even more eco-friendly than a reindeer?

Several designers focused on the clean, green transport of the future. Mazda's MX-Mas offering looks the least car-like. The flying sleigh has sleek aerodynamic lines but almost no room for the presents.

Ford chose to go for a small, economical model: the C-Max on sleigh runners has snazzy sliding rear doors and a spoiler, too.

Enough of Vauxhall's woes in 2009 designers at its European arm Opel came up with something straight out of Star Trek for Santa to zip around the globe.

Santa's traditional 9brp (brake reindeer power) engine may be economical, depending on the price of hay, but VW reckons it can do nearly as well with a take on the new '1l' (one litre) diesel hybrid car which it showed at the Frankfurt motor show 2009. It's designed to travel 100km on just one litre of diesel (that's around 235mpg!)