More for you |
Every 5-star car on What Car?Used test: Maserati Levante vs Porsche MacanNew issue of What Car? magazine on sale nowMost and least reliable small SUVsRevealed: the car makers whose discounts have got bigger since lockdown
Home
News
Pregnant women, park here
news 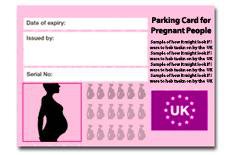 Pregnant women could get their own parking bays, if plans being discussed in the Welsh Assembly go ahead.

Pink-badge parking
Women in their final three months of pregnancy would be given pink badges by their GP or midwife. This would give them the same rights as disabled drivers, and save them having to walk so far to shops and amenities.

Darren Millar, Welsh Assembly member for Clwyd West, proposed the idea after being inspired by his wife Rebekah's experiences during pregnancy.

Mr Millar said: 'While this is not a major issue for everybody, it is something I feel strongly about.

'It's about giving pregnant ladies in those last three months a bit of extra help.

'They shouldn't be struggling with heavy shopping bags and walking from one end of the car park to the other.'

The plans have been laid out in the Welsh Assembly as a legislative competence order (LCO).

The proposed LCO needs to get a majority vote to go ahead. If successful it could eventually be extended across Britain.