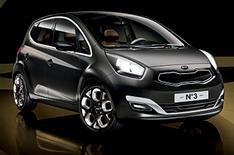 Kia will replace virtually its entire range within the next three years.

The plans include entering new areas of the market, phasing in more-efficient engines and transmissions, while also making a major push for higher quality.

'We are not just talking about updates,' said Hyoung-Keun Lee, who's responsible for Kia's overseas marketing. 'By 2012 our oldest car will be the Soul.'

New models in the pipeline include Kia's first-ever GTIs, based on the next-generation Rio and Cee'd supermini and small family car; hybrids; and a stylish mini-MPV that's almost identical to the Kia 3 concept car shown at the Geneva motor show earlier this year.

The mini-MPV arrives early next year, at roughly the same time as a new Sorento mid-sized SUV. The next Rio is also due to hit showrooms in 2010, with a replacement for the Carens Kia's Vauxhall Zafira rival due at the start of 2011.

'Despite the recession, there will be no delays in our product renewal programme,' said Mr Lee.