Range test: How far can electric cars go in winter?

Last summer, we drove 10 electric cars until they died to find out their real-world ranges. But now we’ve repeated the test in the chill. So, how much difference does temperature make?...

If you’re a regular reader, you might remember that last July we put 10 electric vehicles (EVs) through a ‘drive ’em till they die’ test to find out how realistic the official (WLTP) range figures are – the figures manufacturers are obliged to publish in brochures and on their websites.

We discovered that the answer is: it depends on the car. The Porsche Taycan, for example, got very close to the official figure, whereas the Fiat 500 fell 29% short. Importantly, though, none of the cars we tested actually matched its official range, even in near-ideal conditions on a warm July day. And we know EV batteries don’t work as well in cooler conditions, so what happens to their ranges in winter, when the mercury plummets and the wind picks up?

To answer that very question, we decided to repeat the test on a chilly day in February. We used five of the same cars as last summer – to allow a direct comparison – and also added five new models. Our results show how lower temperatures can affect EV ranges. 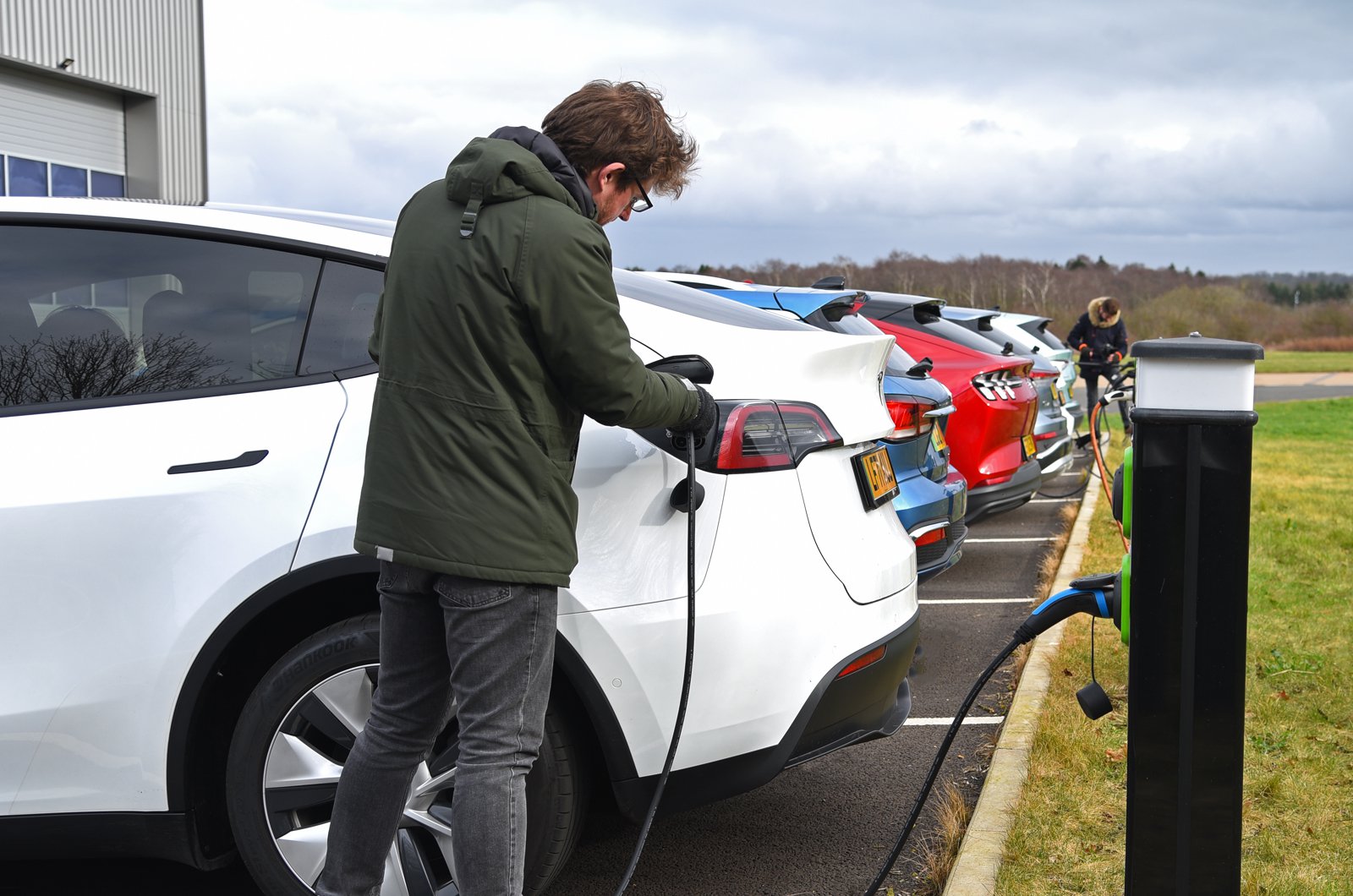 How we did it?

For obvious reasons, it wouldn’t have been safe to deliberately run the cars out of charge on a public road, so we carried out the comparison at our test track in Bedfordshire.

We used exactly the same loop as last summer, with 2.6 miles of simulated stop-start urban driving, four miles at a steady 50mph and eight miles at a constant 70mph. The high proportion of motorway-speed driving reflects the fact that if you plan to drive your electric car a long distance in one hit, you’re likely to be using the motorway network.

The cars were fully charged then unplugged and left out in the open overnight for roughly 15 hours, in 3-6deg C ambient conditions. The following morning, all 10 were plugged in again to check they had full batteries before the climate control was set to 21deg C and the headlights switched on. 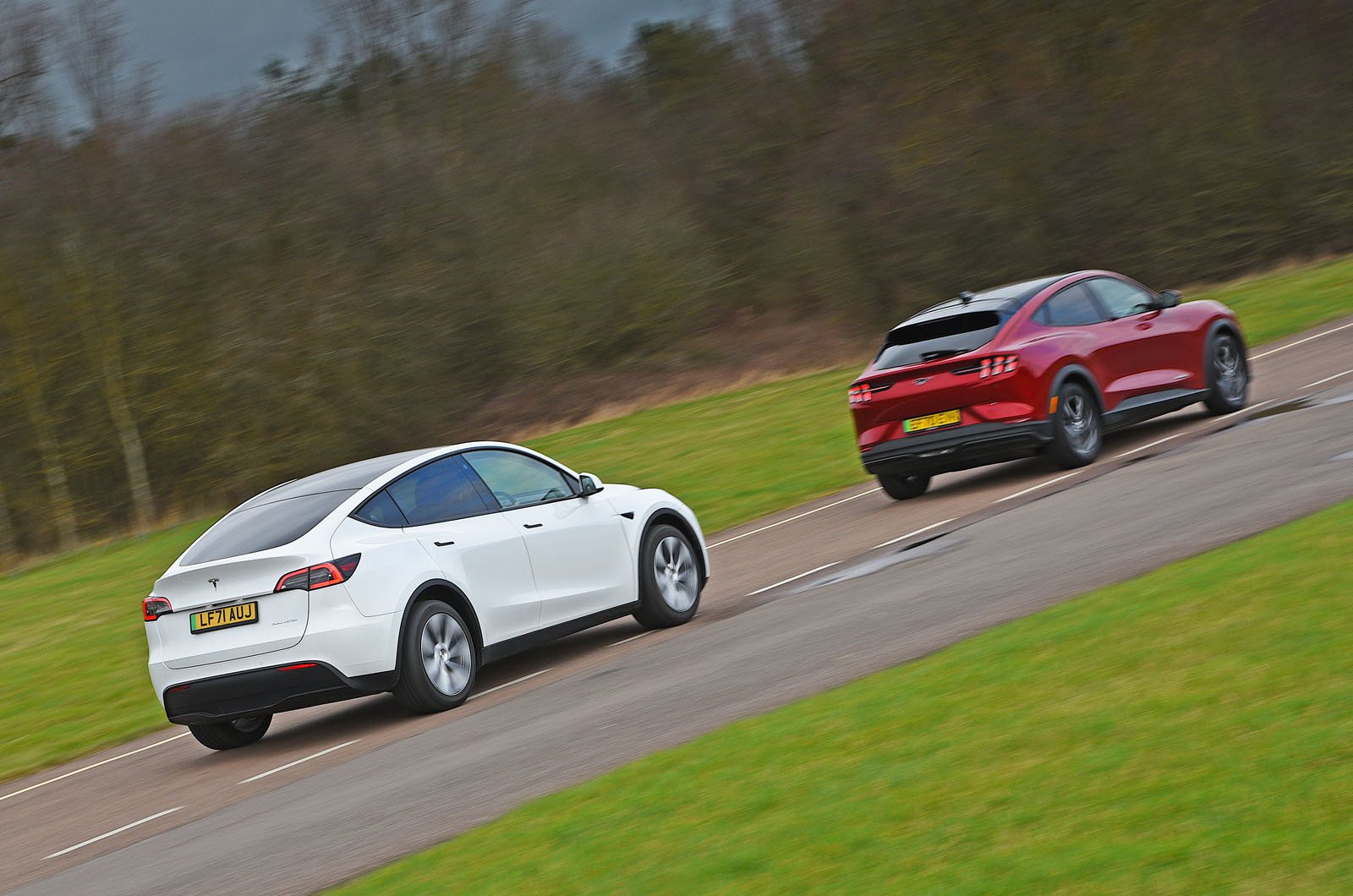 Normal (or the closest equivalent) driving mode was selected and the cars were left in their default regenerative braking setting, with the exception of the Taycan, because it defaults to the Off setting. We set it to Auto instead. Pre-conditioning – where an EV’s interior is warmed up while it charges – wasn’t allowed.

The 10 cars were then driven round our test route in convoy, with driver changes at the end of each lap, plus a switch in running order to ensure no car was always punching a hole in the air for the others.

The minimum temperature during testing was 3deg, rising to a peak of 7deg in the early afternoon. It was a relatively windy day, but there was no rain. 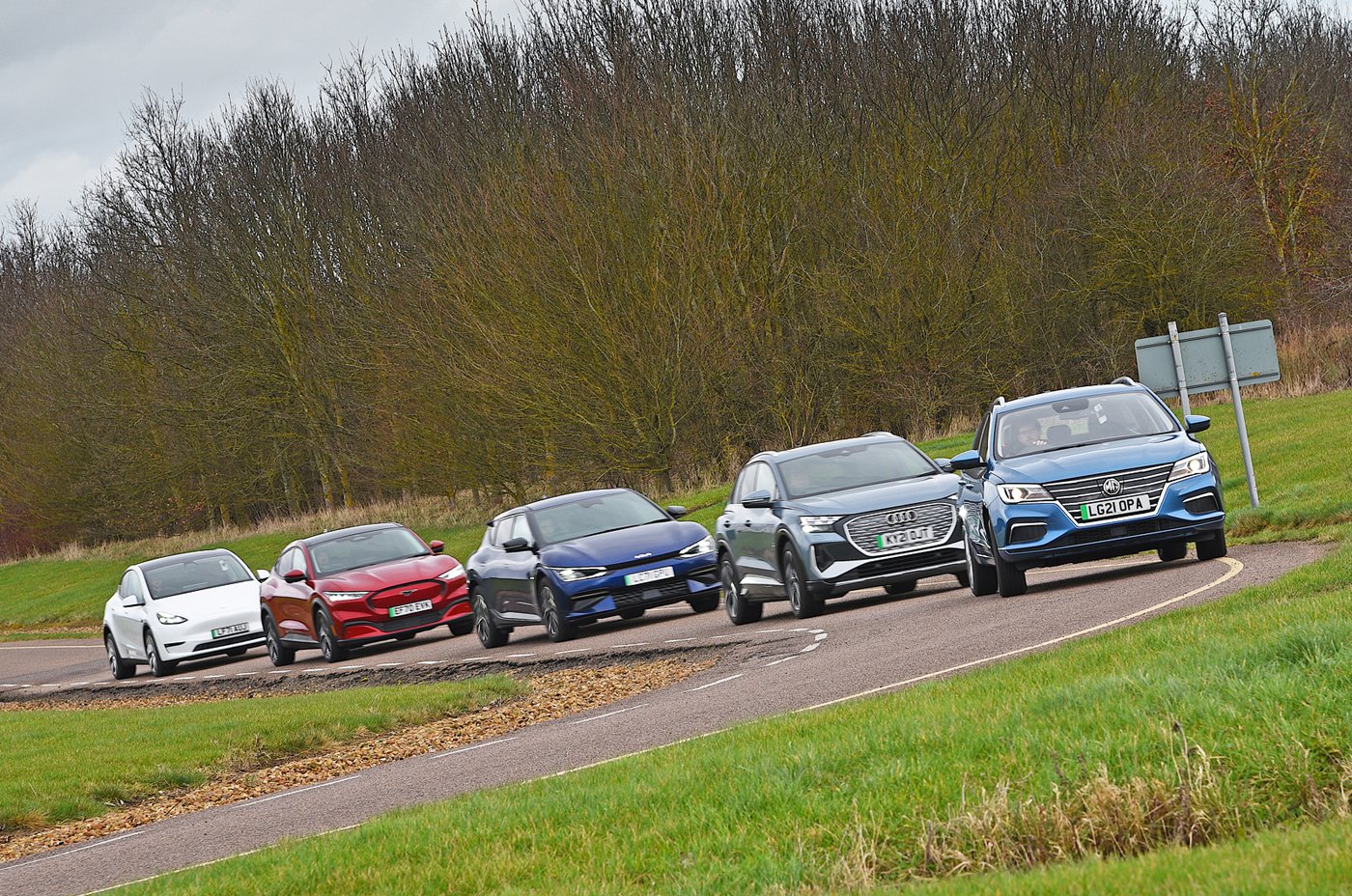 The car with the smallest battery, the Fiat 500, ground to a halt first – which is hardly a shock. Disappointingly, though, it was a long way adrift of its official range. The trendy Italian city car managed just 118 miles on a full charge, a whopping 40% short of the official figure, although its efficiency worked out at 3.2 miles per kilowatt hour (kWh); the average was 3.0.

Next to drop out was the MG 5 at 167 miles, followed swiftly by the Skoda Enyaq iV, which managed 174 miles. Their efficiencies worked out at 2.9 and 3.0 miles/kWh respectively.

Every other contender managed at least 200 miles, although only just in the case of the Audi Q4 e-tron. It conked out after 201 miles and was the least efficient car in the test, averaging just 2.6 miles for every kWh of energy. On the plus side, it still achieved a range that many potential buyers will consider perfectly usable. 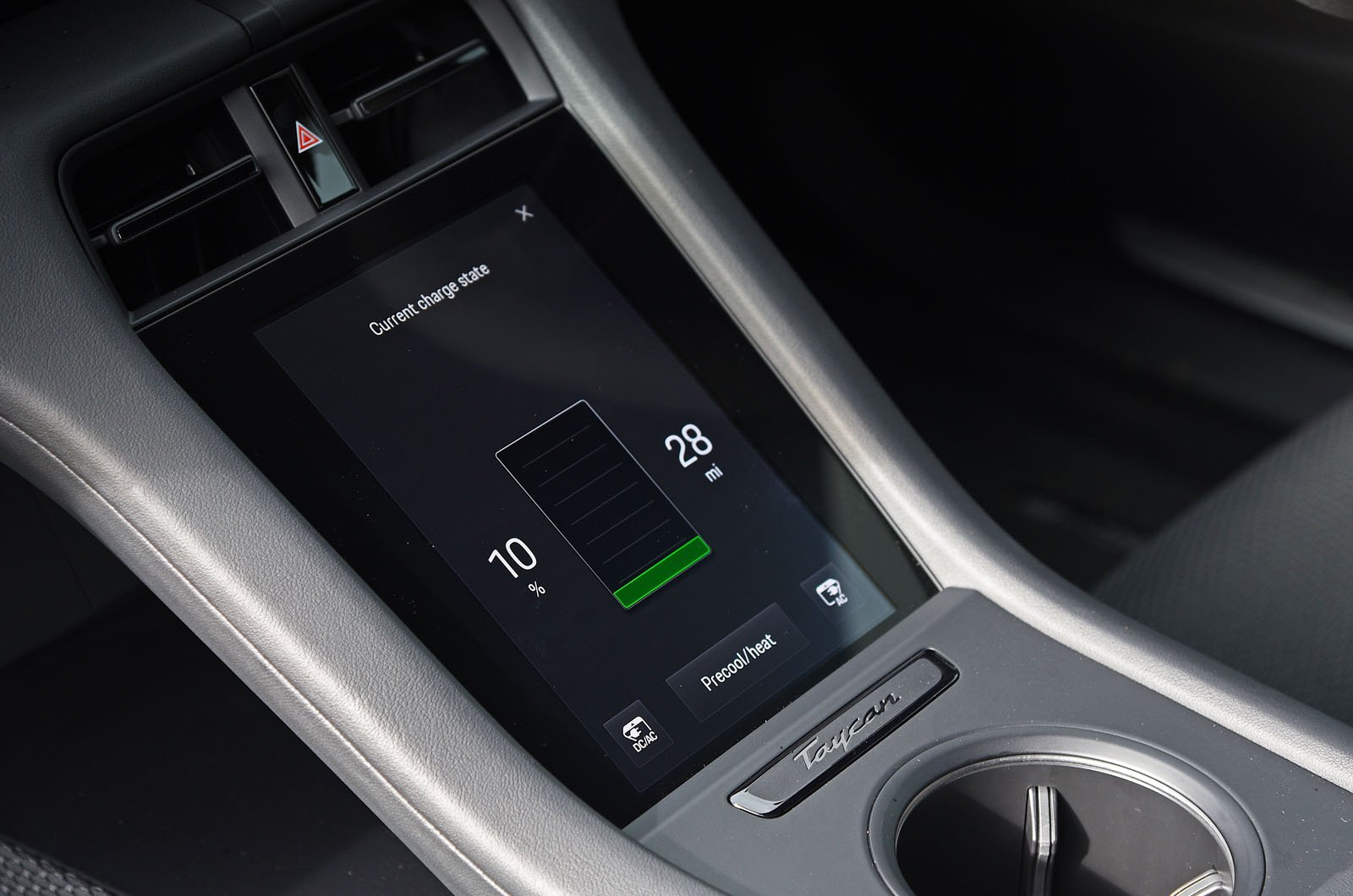 The recently facelifted BMW iX3 fell next, at 212 miles, followed by the Porsche Taycan and Kia EV6, at 224 miles and 228 miles. The Taycan came the closest to matching its official range (it fell 21.8% short), but not by efficient use of energy. Then again, it’s an incredibly capable performance car, with fat, sticky tyres and acceleration that can embarrass even the Tesla Model 3, so that’s hardly surprising.

The top three cars carried on for at least another 20 miles, with the Ford Mustang Mach-E and Tesla Model Y practically tying on 247 miles. The Mach-E edged it by about 300 metres, but the Model Y was the far more efficient car of the two, averaging a very respectable 3.3 miles/kWh. It also got much closer to its official range than the Mach-E.

But one of our contenders stood head and shoulders above the others, and that was the Tesla Model 3. It not only kept going for the longest, managing a seriously impressive 281 miles, but was also by far the most efficient, averaging 3.7 miles/kWh.

Just how much of an effect does cold weather have on an EV’s range?

To answer that question, we need to focus on four of our contenders: the Fiat 500, Ford Mustang Mach-E, Porsche Taycan and Skoda Enyaq iV. We tested them all last summer in identical forms, right down to details such as the size of their alloy wheels.

On average, the four cars fell 17% short of the distance they achieved back in July. The closest was the 500, which ran out of juice 21 miles sooner than in warm weather. The Taycan suffered a dead battery 56 miles earlier than it did in the summer. 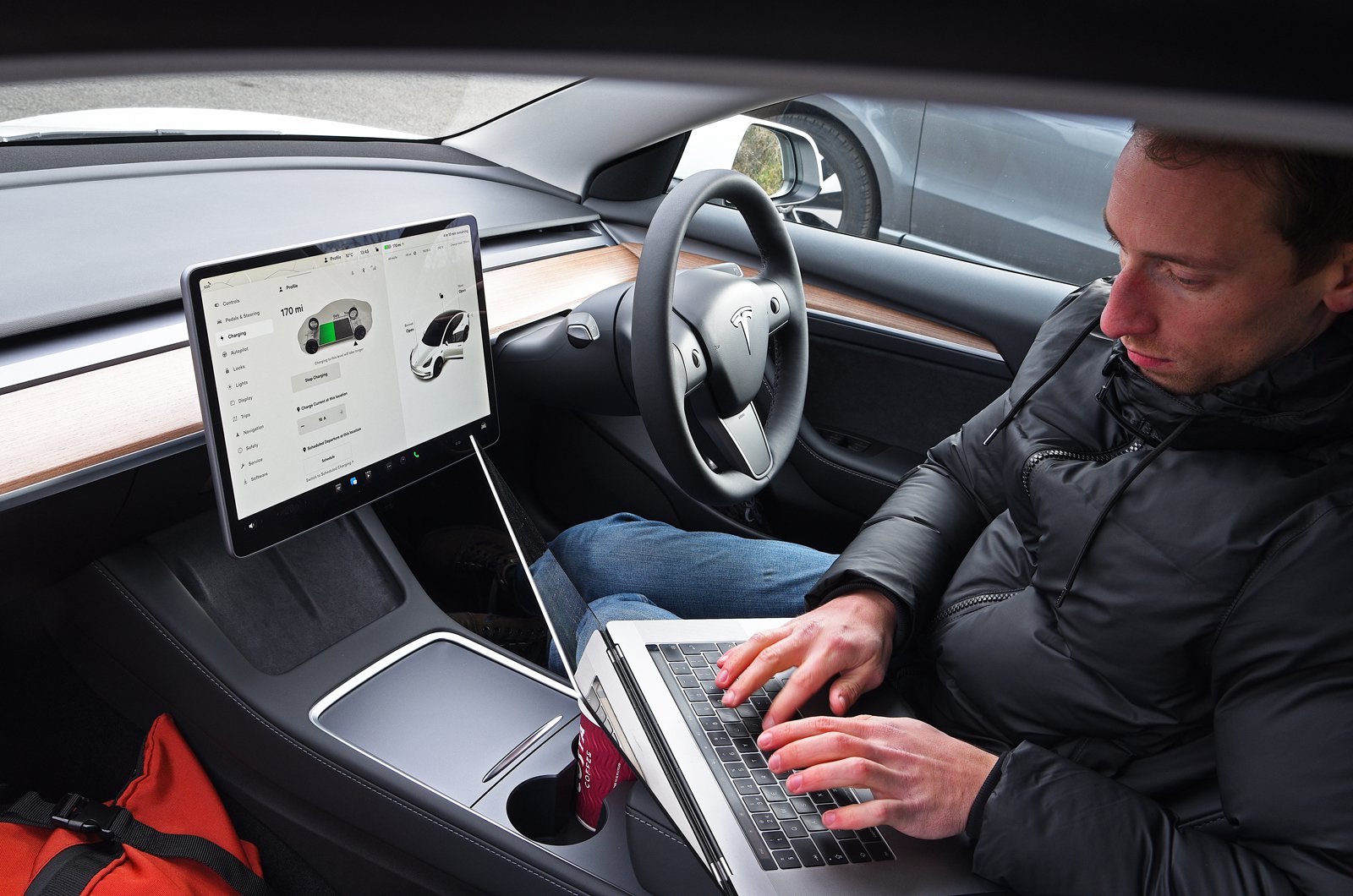 So, based on our tests, you can expect around 15-20% fewer miles from an EV in the winter than in summer. An even bigger drop in range is inevitable in snowy and icy conditions.

Do heat pumps make a difference?

The traditional way of warming up the interior of an electric car is by using a resistance heater that feeds off the drive battery. In essence, we’re talking about the sort of rudimentary fan heater you might use in a greenhouse to keep the frost off your tomatoes.

However, some newer EVs have heat pumps, either fitted as standard or available as an option. They consume much less power than resistance heaters, and essentially move warmth from one location to another in much the same way as a refrigerator does.

In some EVs, the heat pump can either warm up the battery or cool it down, and when it cools it, excess heat can be sent to the interior. The pump can also take heat from air around the car, compress it to increase its temperature, and again use it to warm the interior. 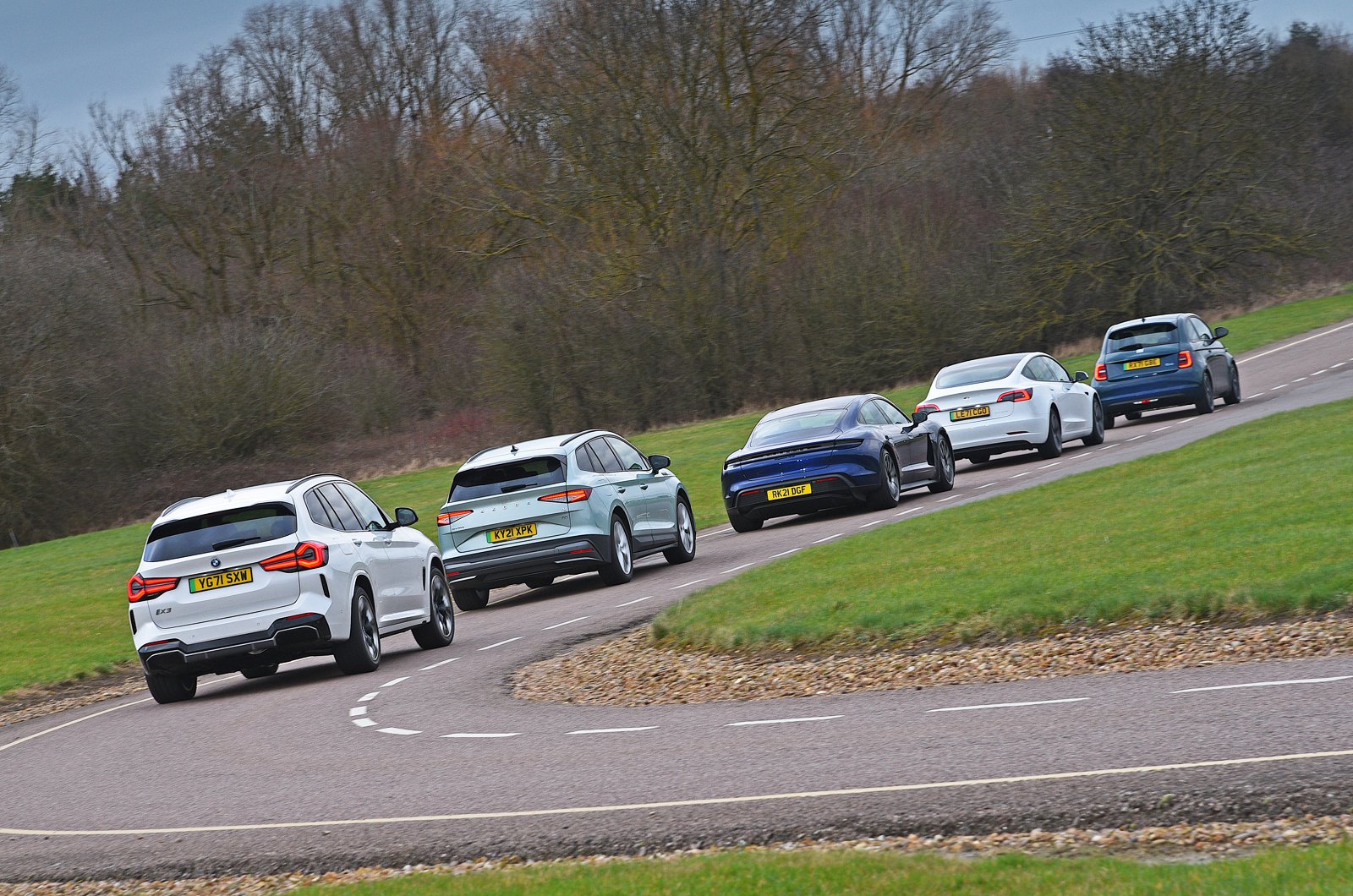 As luck would have it, half the cars in our test had heat pumps and half didn’t. Those with them fitted fell an average of 25.4% shy of their official range, compared with the 33.6% shortfall suffered by cars with regular resistance interior heaters. Likewise, the cars with heat pumps were more efficient, averaging 3.2 miles/kWh, compared with 2.9 miles/kWh for those without.

We weren’t able to test an identical model with and without a heat pump to find out the difference with no other variables. Nevertheless, if you plan to push the range of your EV in winter, we’d recommend choosing a car with a heat pump fitted or adding one as an option.