* Exclusive preview of the Peugeot 2008 * New SUV is based on the 208 hatchback * Readers give video verdict on the new car... 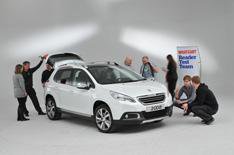 We gave What Car? readers the opportunity to look around the new Peugeot 2008 SUV in an exclusive preview at our HQ in Teddington and they gave us their verdict.

The new Peugeot is the latest of several small SUVs to be launched recently and will be a rival to the likes of the Nissan Juke, Renault Captur and Vauxhall Mokka.

It offers the benefits that you'd expect from a small SUV, with a raised ride height, a roomier cabin and improved rear loading space.

The 2008 will be available to order in May, with deliveries starting later in the summer. Prices haven't been confirmed, but we expect it to cost from around 14,000.

In the meantime, has it done enough to impress our What Car? Reader Test Team and potential owners?