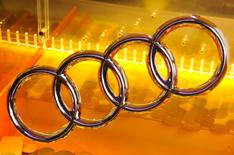 Security
The winner: Audi
For the third year running, Audi is the clear leader in the fight against car crime from its entry-level A3 right through to its flagship R8

Congratulations to Audi for this hat-trick of What Car?/Thatcham Security Award wins.

This years victory means that Audi remains the only car manufacturer to have won our collaborative award with Thatchams Motor Insurance Repair Research Centre since it was introduced in 2008.

Thatcham experts have examined thousands of models, testing every element of a cars security, including break-in tests to see how long it will keep a determined thief at bay. If Thatcham says a car is secure, then you know it is and it says that Audis are the best of all.

Audi has done more than any other manufacturer to make life as difficult as possible for criminals, whether theyre looking to steal the car itself or just break in to make off with valuables.

State-of-the-art alarms and immobiliser systems, top-notch lock shielding and plenty of parts marked with the vehicles details are just some of the features that win praise from Thatcham.

The best bit of all, though, is that you get a strong, secure Audi whichever model you buy
it doesnt matter whether youre saving up the pennies to buy an entry-level A3 hatch or blowing 100,000 on the R8 supercar.

If Audi continues with its sterling work, it looks like being an extremely difficult task to dislodge it from the top spot in 2011. Its not impossible, but second-placed Volkswagen will have to work hard with the new models it has waiting in the wings to overtake its counterpart from the VW Group stable. Volvo is also close behind, so the battle still rages in the fight against car crime.