More for you |
Every 5-star car on What Car?Used test: Maserati Levante vs Porsche MacanNew issue of What Car? magazine on sale nowMost and least reliable small SUVsRevealed: the car makers whose discounts have got bigger since lockdown
Home
News
Sing your way home for Christmas
news

Sing your way home for Christmas 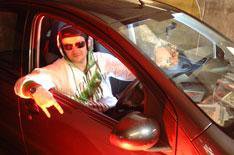 You know it's Christmas when a new survey reveals the top festive tracks for singing along to in the car. This year Kia does the honours.

British motorists plan to drive an average of 92 miles over Christmas visiting family and friends, according to Kia's research. Four out of five drivers will listen along to music or talk radio, and the most popular Christmas song is Slade's 'Merry Christmas Everyone'.

One in five of those surveyed chose the track which includes a line about Santa doing a 'ton up' on his sleigh. We just hope he's not planning to do that on British roads or he'll face an instant ban and there will be a lot of disappointed children on Christmas day.

Chris Rea was first choice for women and the over-55s, while drivers aged 25-34 were more likely to pick Maria Carey's song.