Small car for a small garage 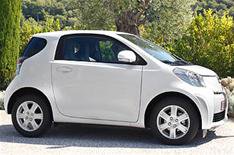 I have recently bought a garage with a narrow entrance and approach. I had great difficulty getting a Renault Twingo into the space, and need to buy something slightly shorter, although not necessarily narrower. I would prefer not to get a Smart Fortwo, and was wondering if there any other options available to me? Four seats would be a massive bonus, as would cheap car tax.
Howard Cattell

The shortest four-seater on the market is the Toyota iQ, which goes on sale in January. At just 299cm long its more than a metre shorter than a Renault Twingo.

However, with prices starting at 9495, it is very expensive and only really suitable for seating three unless the driver is very short and theres a child behind. On the plus side you wont have to pay a penny in car tax, because CO2 emissions are just 99g/km.

A better buy is the Fiat 500, but at 355cm long it's less than 5cm shorter than the Twingo so might not be dinky enough.

If it fits, the Fiat has four proper seats and a much lower price tag, starting from 8100. Our favourite is the 1.2 petrol version, which costs just 35 a year to tax, too.

Another option is the Toyota Aygo. Its better value than an iQ, with prices starting at 7175, and shorter than the Fiat at 341cm long. Add four proper seats and a 35 yearly tax charge, and the Aygo could be ideal.