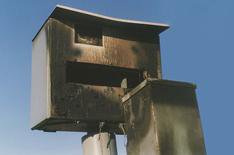 Safety cameras in East Dorset have been attacked and destroyed by revenge-hungry motorists.

Two cameras have been put out of action in the past month alone. Both were set alight on the same stretch of road in the village of Verwood, while four others in the region have been vandalised in the previous year.

Undercover police are now patrolling the area in an attempt to catch the culprits.

Council considering cameras' future
The attacks come as councillors in nearby Bournemouth are considering whether to scrap the town's 20 speed cameras. A committee is deciding whether the cameras have reduced speeding and accidents.