* 1 in 4 men complain about their partner speeding * Arguments over directions most common in London * Midlands drivers argue most about speed... 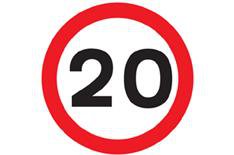 Speeding is the number one cause of arguments between partners while in the car, according to research conducted by Tescocars.com.

25% of men and 21% of women surveyed said driving above the speed limit was the most likely thing to start a fight.

Getting directions wrong was another significant cause of in-car domestics. This was particularly true of London-based motorists and those aged between 55-65.

Other reasons given included tailgating, parking and driving too aggressively. Surprisingly, children fighting in the back of the car was the least likely reason to cause an argument between a couple.

Drivers in the Midlands argue most about speeding. Over 55% cited it as a cause of arguments - perhaps unsurprising given that there are over 60 motorists caught speeding every day in Birmingham alone.

Rebecca Ryan, Marketing Manager of Tesco Cars, said: Most couples will have argued about something in the car at one time or another. Given the potentially serious consequences of speeding, perhaps we shouldnt be surprised that it is the chief cause of fights.