More for you |
New Volkswagen Golf vs used Volkswagen Golf: which is best?How can I sell my car safely during the coronavirus pandemic? Skoda Superb Estate iV plug-in hybrid long-term test reviewNew issue of What Car? magazine on sale nowMost efficient hybrid cars you can buy
Home
News
Superminis - 1
news 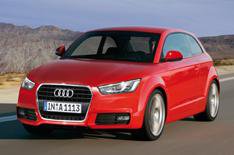 Audi A1 (Artist's impression)
Price from 14,000 (est)
On sale Autumn
What is it? Baby Audi ready to give the Mini a run for its money.

Audi has given plenty of clues as to what its future Mini rival will look like. The A1 Metroproject Quattro concept car was unveiled more than two years ago at the Tokyo motor show, and a year later a five-door 'Sportback' version was shown at the Paris show.

Both of those were petrol hybrids, with Volkswagen's 1.4 TSI engine driving the front wheels and an electric motor on the rear axle providing extra oomph when needed. However, the first production A1s will be far more conventional, with a front-wheel-drive-only layout. Engines haven't been confirmed, but they will be from the existing VW line-up, which means the 1.2 TSI and 1.4 TSI turbocharged petrol engines look certain to feature. A hybrid will follow a year or so later.

What car? says
'We're going to see more and more "posh" car manufacturers making small cars big on comfort and quality. I can't wait to see how well the Audi A1 does.'
Steve Fowler
Group Editor
The A1 isn't Audi's first stab at a supermini. The A2 was the most recent attempt and sold in the UK for five years before getting the chop. It's aluminium construction made it too expensive to buy and repair, but since demand for compact, low-emission cars is now higher than ever, Audi's simpler new baby has a much better chance of success.

We'll get to see the final design in March at the Geneva motor show, with early drives taking place later in the summer. As with the concept cars, a three-door model will arrive first, with a five-door 'Sportback' following in early 2011.

What do you think of the predicted look of Audi's latest supermini? Have your say in our New Car Survey at whatcar.com

Chevrolet Spark
Price from 6945
On sale March 12
What is it? A potential saviour for Chevrolet in the UK

The Spark is a long-overdue replacement for the Matiz. It's the first car built on GM's new small-car platform and will initially be available as a five-door only although a sporty three-door will probably follow.

Chevrolet is pinning a lot on the success of the Spark, so it needs to deliver. We reckon the fresh-faced and edgy styling is a good start.

Prices will range from 6945 to 9845, with the LS trim expected to be the most popular that'll set you back 8445 with a 1.0-litre petrol engine. Running costs promise to be low, according to Chevrolet: the manufacturer claims that both the 65bhp 1.0-litre and 77bhp 1.2 petrol engines will manage at least 56mpg, and emit less than 120g/km of CO2.

Citroen DS3
Price from 12,500 (est)
On sale Spring
What is it? Upmarket, three-door revamp of the Citroen C3

This posh, three-door version of the new C3 is the first of several Citroens in line to receive the 'DS' badge, which will be used to differentiate upmarket cars from more run-of-the-mill models.

The DS3 is targeted at would-be Mini and Alfa Romeo Mito buyers, and we reckon there's more than enough je ne sais quoi about the way it looks to give both of its rivals a fright. The black pillars and distinctive 'shark fin' rising out of the rear wing combine to give the appearance of a 'floating roof', and there will be loads of ways for buyers to stamp their own mark on the car through customisation.

With a 285-litre boot, the DS3 will certainly be more practical than a Mini. The way it drives remains the big question.

Fiat Giardiniera (Artist's impression)
Price from 11,000 (est)
On sale Mid 2011
What is it? New 500 estate could be a real headache for the Mini Clubman

Fiat has a busy few years ahead. This computer-generated image (right) shows the popular 500 in estate form it will almost certainly be called the Giardiniera (after the original 1960s car).

A new Uno is also in the pipeline. It will be based on a shortened version of the Grande Punto platform, and sold as a budget car. The original Uno (our Supermini of the Year in 1985) is still sold in some countries, including Brazil, where there is much enthusiasm for a new model.

Long before either of those arrive, the Punto Evo a restyled and upmarket version of the Grande Punto will appear. It goes on sale in January, with a classy new interior and two brand-new, ultra-efficient 'Multiair' petrol engines to choose from.

Also on the way...
What and when...new cars coming your way in 2010
Alfa Romeo Mito Multiair - (pictured)
Suzuki Swift