More for you |
Jaguar E-Pace vs Jaguar F-Pace: which is best?It it right for dealer to keep a used car's registration document for months? Will my car be able to run on the new E10 petrol? UK’s first electric car charging forecourt to openBMW X7 long-term test review
Home
News
Suzuki SXForce
news 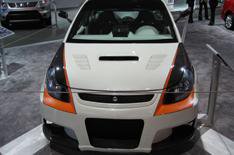 It's been seen before at last year's Tokyo motor show, but in Detroit it has been confirmed that this motorbike-inspired concept car could form the basis for a high-performance SX4.

The warm hatch would be launched and promoted off the back of the firm's new World Rally Championship challenge, which begins in earnest this year.

The concept car features several motorbike-inspired items, including handlebars for a steering wheel, but if you cast them aside, it's clear the concept could easily become a road car.