More for you |
Best plug-in hybrid: BMW 330e vs BMW 530eThe best SUV dealsCar sales down 89% year on year in MayBest used city cars for less than £2000 (and the ones to avoid)Volkswagen T-Cross long-term review
Home
News
The 200mph Bentley
news 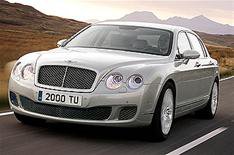 Subtle styling tweaks distinguish the Speed from the standard Flying Spur. The more powerful car gets its front grille and lower air intakes finished in dark-tinted chrome, as well as a new design of exhaust tailpipes.

The Speed's power steering has also been retuned, and the suspension has been lowered.

The standard Flying Spur has also been revised, with some mild visual changes, better noise insulation and the option of adaptive cruise control and a new Naim audio system, which includes an 1100-Watt amplifier.