More for you |
Coming soon: new cars worth waiting forWhat are our rights regarding Mini with blown engine? MG ZS EV long-term test reviewEvery 5-star car on What Car?How to spec a Peugeot 5008
Home
News
The power and the glory
news

The power and the glory

* Brilliant executive express * Has it lost some precision? * On sale from March... 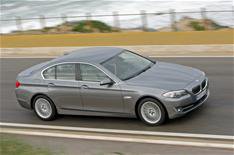 'Beware the ides of March' is something Audi, Jaguar and Mercedes-Benz would do well to heed, because next month the all-new BMW 5 Series hits the road, and the omens look good for it.

For many people business users in particular the current 5 Series remains the benchmark by which all executive cars are judged, so it's one seriously tough act to follow. However, our drive of the new, sixth-generation 5 Series has confirmed that it's a challenge BMW has not only risen to, but surpassed in spectacular fashion.

The powers that be
Seven engines are planned for the UK, but not all will be available from launch. We have to wait until July for the businessman's darling, the 520d, now with stop-start for the first time in a 5 Series. Its figures look reasonable: power is up to 181bhp yet, with the standard six-speed manual gearbox in situ, it puts out only 132g/km of carbon dioxide and therefore sits in the 18% band for company car tax.

It'll do an average of 56.5mpg, too.Of the engines that will be launched in March, the new 3.0-litre turbodiesel engine merely confirms our view that no one makes better diesels than BMW just now. It's smooth to rev, delivers great economy, punches hard and noise is so well suppressed at a cruise that your passengers will be surprised when you eventually stick a black fuel pump into the side of the car.

The other engine we drove was the new turbocharged 3.0-litre petrol, and it was easy to become enthralled by its silky low-end delivery, huge mid-range punch and willingness to rev. It does become a smidgen harsh as the rev-counter hits the big numbers, but in everyday motoring there's so much muscle that you'll seldom need to work it that hard.