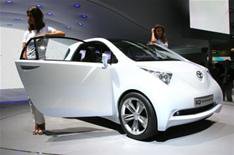 Toyota insiders say its cute iQ concept city car will go into production next year, although not necessarily with that name.

The concept car, shown at last year's Frankfurt motor show, is smaller than the Aygo, but has enough room for three adults and one child.

The sweeping dashboard design and compact centre console allow the front passenger seat to move far enough forward to fit an adult in the rear seat behind.

• Ahead of Toyota's new city car launch will be the next Avensis family car. Expect to see the new Avensis before the end of the year. It should go on sale here in 2009.