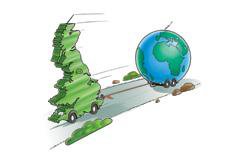 Did you know that 10% of the UK's total exports, worth a heady 24 billion, come from the car industry? Around 80% of all cars made in the UK head overseas, so that figure isn't really surprising.

'The UK car industry remains hugely significant to UK plc, a significance that the country ignores at its peril,' claims the Society of Motor Manufacturers and Traders (SMMT), the car industry trade organisation.

There are 32 factories making vehicles and engines in the UK. The headline-grabbers are household names, such as Ford, Jaguar, Land Rover, Mini and Vauxhall the main contributors to car exports of around 1.1m a year. Then there's Nissan's Sunderland plant and Toyota's in Burnaston, Derbyshire.

UK wins the Astra deal
Vauxhall's Ellesmere Port factory, for example, will be the sole supply source for the new five-door Astra, beating factories in Germany, the Benelux countries, Spain and eastern Europe to this vital contract.

Bear in mind, too, that all BMW and Mini four-cylinder petrol engines are made at the Hams Hall plant in the Midlands a total of 371,000 units.

A further 1.8 million engines are made by Ford at both its Dagenham and Bridgend plants.

'Half of all the cars and vans we sell in Europe are powered by petrol or diesel engines built in Britain,' says Ford. 'So British automotive expertise is vital for our business.'

Bridgend has even returned to weekend working, making 1.25-litre, 1.4 and 1.6 petrol engines to satisfy demand boosted by various scrappage schemes across Europe.

In the post-industrial phase in which the UK now finds itself, though, brains and intelligence are just as valuable as solid products such as cars.

Spreading UK know-how
Bentley is proud that its latest flagship model, the 'Grand Bentley', is all British designed, engineered and built at Crewe.

West Sussex-based Ricardo, and Lotus in Norfolk, are among many specialist consultancy firms that work with car makers around the globe and you'd be surprised by some of the big-name cars they've helped to develop. The Kia Soul, for example, had its suspension tuned by Lotus.

British managers have also reached the top across the world: former Audi UK exec Kevin Rose is now a senior manager at Audi's HQ in Germany; Paul Philpott is guiding Kia Motors Europe to greater things; and former Land Rover exec Ian Robertson sits on BMW's board in Munich, where he wields global responsibility for sales and marketing, while also running Rolls-Royce.

The top Brit in the global car industry is a toss up between Ford and General Motors execs Lewis Booth and Nick Reilly. Booth probably shades it. He's number two at Ford in Detroit, with responsibility for finance, but Reilly runs him a close second, having full responsibility for GM's growing businesses in Asia-Pacific, including China.

We haven't even mentioned all those British designers and engineers sprinkled elsewhere in the global car industry, either.

Britain's most famous car marques might not be the force they once were, but this country still wields huge influence in the global car industry.