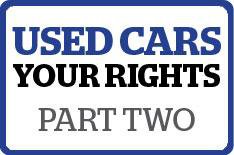 What Car? has teamed up with the Government-funded consumer rights organisation Consumer Direct to help you avoid getting ripped off when buying a used car. From explaining your rights through to making a complaint, well help you stay one step ahead of unscrupulous car dealers. Join us for our week-long series of reports and advice.

Dealers responsibilities
Used car forecourts continue to be a battleground for consumers. For the past four years, used car complaints have topped the list of problems reported to Consumer Direct.

In 2009 this amounted to more than 50,000 complaints, ranging from cases of poor quality goods, through to garages deliberately misleading buyers in order to sell a car.

As a result of the complaints, the Office of Fair Trading (OFT) initiated a study of the second-hand car business. It consulted buyers, dealers and even What Car? the objective was to get to the root of why used car purchases caused so many complaints.

Consumers unsure of the law
One of the OFT's main conclusions was that while used car buyers already have a decent level of protection under existing consumer laws, many are unsure of what they are.

Illegal activities such as clocking (intentionally winding back a cars mileage to increase its value) or falsifying a service history are clearly wrong, but sometimes its hard for consumers to know exactly how a law has been infringed.

To make matters worse, it was revealed that some car dealers were unsure of the rules and how they could stay on the right side of them. As a result, a set of guidelines for second-hand car dealers was produced.

The OFTs new guidelines for the sale of second-hand cars is designed to dispel any confusion over existing consumer laws, so that dealers and consumers understand whats acceptable and whats not.

However, the initiative helps in more ways than one. The guidance is primarily for second-hand car dealers, but its also of use to enforcers, such as Trading Standards Officers. Although the guidelines are mainly concerned with cars sold from forecourts, they also cover dealers who sell cars via auctions.

To find out more about your rights when buying a used car visit,