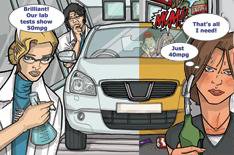 The VCA is right that variations in driving style, traffic and weather conditions mean that no single overall figure is ever going to represent everyone's fuel consumption. Our average figure should be closer to what you'll achieve in the real world than to the official average figure, but look at the right figures for your usual driving conditions.

For example, examine the urban and suburban figures (low speed, heavy traffic; higher speed, less traffic) if you drive mainly in town, the motorway figure if you're usually on major trunk roads, and the gentle driving data if you're lucky enough to spend most of your time cruising along country roads.

Why is variation in the amount that cars deviate from their official figure so great, though? Why isn't the playing field level?

Peter de Nayer says: 'There's no doubt that you can get a car to perform well in the two simplistic NEDC laboratory tests. Expose a car to the real road, however, and it can be a different story.'

Peter reckons one of the biggest problems with the official test is the lack of simulated motorway driving: 'Our 70mph test puts a strain on smaller-engined cars, such as the Smart diesel and the Toyota iQ. That's partly the reason that, generally speaking, superminis were further behind their official fuel economy figures than bigger cars'. As you can see from the results, the Smart and Toyota use more fuel at 70mph than the much larger, more powerful BMW 520d.

Peter also explained some of the tests' seemingly unusual results: 'It's no surprise that performance cars, such as the Porsche 911 or Ford Focus ST, came close to, or beat, their official fuel economy figures. Powerful engines are under very little strain during real-world driving, whereas smaller engines need to be worked much harder.

What Car? is pushing hard for a better official test to be in place before the next set of emissions standards due in 2014. The test has to bear far more resemblance to the real world, just as our tests attempt to do. More representative tests will help you to calculate your fuel costs more accurately before buying, so you'll pick a car that's right for you.