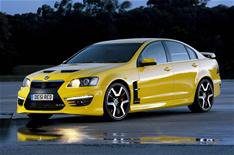 Vauxhall has pulled the wraps off the new VXR8 its rear-wheel-drive 6.2-litre super-saloon.

The striking-looking car has a new 'Shockwave' grille, LED daytime running lights and new wing-vents. It also has a new rear spoiler and twin exhaust tips that mimic the shape of the front grille.

The interior has been overhauled, too. Leather seats now come as standard. The instrument panel has been updated and standard kit now includes aux-in/USB inputs, MP3-player support and Bluetooth with phonebook display and touch-screen dialling.

For the Playstation generation, the car now has what Vauxhall calls EDI, or Enhanced Driver Interface. It shows real-time performance data on the car's main five-inch monitor, including vehicle G-forces, power and torque, lap times and the degree to which the VXR8 is drifting.

The VXR8 costs from 49,500 (with VAT at 20%) and is available to order now, with first deliveries expected in March.