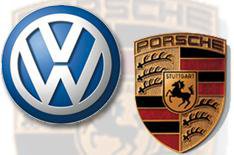 Volkswagen and Porsche will merge, it has been announced.

It follows the resignation of Porsche's CEO, Wendelin Wiedeking, which cleared the way for VW to complete the union.

Volkswagen will now begin talks with the new management at Porsche, in order to create 'an integrated automotive group with Porsche' under VW's leadership.

Under the plans, Porsche will remain an independent company and keep its headquarters in Stuttgart.

'Like Audi today, Porsche can also continue its independent development under the guidance of Volkswagen and preserve its own identity.