Volkswagen Eos to go off sale

* Volkswagen to take Eos convertible off sale * Current generation to be the last * VW to stick with Beetle and Golf cabriolets... 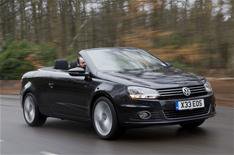 The Volkswagen Eos will not be replaced when the current model comes to the end of its life cycle, according to the company's head of design, Klaus Bischoff.

With the launch of the Beetle Cabriolet, Volkswagen will have three four-seater convertibles in its range, so the Eos will not continue beyond the current model.

'The Eos will not be prolonged, and then you have two [convertibles in the range, the Beetle Cabriolet and the Golf Convertible],' said Bichoff. 'From my point of view on compact four seater convertibles, that is enough.'

He added that the choice was made for VW by a change in buyers' tastes, saying: 'The trend for hard-tops seems to be disappearing again. I don't mind, I like canvas tops.'

However, he added that the Volkswagen Bluesport concept car that was shown at the 2009 Detroit motor show is unlikely to make it to production as a third convertible.

'The two-seater mid-engined sports car is still a boy's dream.

'The problem is that you need to promote yourself to more than one generation and it is not feasible financially and you won't get anyone to implement such a project when the markets are falling so dramatically in Europe,' he said.